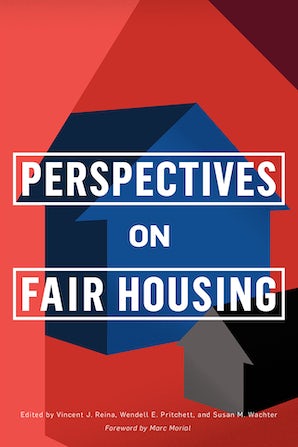 Title VIII of the Civil Rights Act of 1968, known as the Fair Housing Act, prohibited discrimination in the sale, rent, and financing of housing based on race, religion, and national origin. However, manifold historical and contemporary forces, driven by both governmental and private actors, have segregated these protected classes by denying them access to homeownership or housing options in high-performing neighborhoods. Perspectives on Fair Housing argues that meaningful government intervention continues to be required in order to achieve a housing market in which a person's background does not arbitrarily restrict access.

The essays in this volume address how residential segregation did not emerge naturally from minority preference but rather how it was forced through legal, economic, social, and even violent measures. Contributors examine racial land use and zoning practices in the early 1900s in cities like Atlanta, Richmond, and Baltimore; the exclusionary effects of single-family zoning and its entanglement with racially motivated barriers to obtaining credit; and the continuing impact of mid-century "redlining" policies and practices on public and private investment levels in neighborhoods across American cities today. Perspectives on Fair Housing demonstrates that discrimination in the housing market results in unequal minority households that, in aggregate, diminish economic prosperity across the country.

Amended several times to expand the protected classes to include gender, families with children, and people with disabilities, the FHA's power relies entirely on its consistent enforcement and on programs that further its goals. Perspectives on Fair Housing provides historical, sociological, economic, and legal perspectives on the critical and continuing problem of housing discrimination and offers a review of the tools that, if appropriately supported, can promote racial and economic equity in America.

"The United States is facing a dire crisis in housing. We cannot eradicate the catastrophe of unfair housing without understanding the history and politics of housing discrimination that have brought us to the current moment. This volume belongs in the toolkit we need to ideologically equip ourselves in this twenty-first-century struggle to end racism in U.S. housing."—Keeanga-Yamahtta Taylor, author of Race for Profit: How Banks and the Real Estate Industry Undermined Black Homeownership

"Housing is the foundation for prosperity-it determines how we live, work, learn, eat, and so much more. For so many Americans that foundation has been broken and uneven since our nation's founding; and despite our progress, racism and segregation remain today. Perspectives on Fair Housing provides an unvarnished account of the progress toward equality and housing opportunity, as well as an account of the work that remains to ensure safe, affordable, and fair housing to every American."—Julián Castro, Former Secretary of the U.S. Department of Housing and Urban Development

"Perspectives on Fair Housing could not be more timely or true. At this moment of deepening focus on structural racism, Reina, Pritchett, and Wachter have brought together powerful arguments that housing remains at the center of our nation's shameful racial divide. Even more importantly, the book convincingly demonstrates that all Americans would benefit from more inclusive communities that nurture real opportunity and maps a path to that brighter future."—Shaun Donovan, Former Secretary of the U.S. Department of Housing and Urban Development

"Perspectives on Fair Housing comes at a pivotal point in the history of the United States when the nation faces a triple pandemic-the COVID-19 health crisis, the ensuing economic crisis, and the crisis of racism that has plagued us since before the inception of this country. Amid Black Lives Matter protests, the nation is reexamining its effort to address persistent systemic racism and inequality and gaining a better understanding of how residential segregation and housing discrimination fuel structural barriers. This book helps advance that understanding and explores how fair housing principles can be used to help build a better, fairer society."—Lisa Rice, President and CEO, National Fair Housing Alliance

"Many urban advocates can tick off a long list of housing programs and never mention fair housing initiatives. I was one of those, until as Secretary of HUD I saw clearly that all our goals in the housing field depend upon a basic pre-condition: fairness in the operation of the housing markets. This book argues correctly that we have some distance to go before we can say that decent housing is accessible to ‎all Americans without discrimination or bias. Because housing is so central to our national ideal of economic mobility, fair access to housing opportunities must be assured. This book is a must read for everyone who values that ideal."—Henry Cisneros, Former Secretary of the U.S. Department of Housing and Urban Development