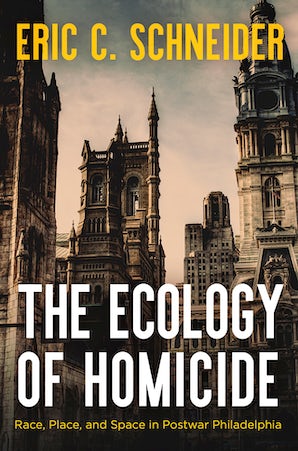 The Ecology of Homicide

Like so many big cities in the United States, Philadelphia has suffered from a strikingly high murder rate over the past fifty years. Such tragic loss of life, as Eric C. Schneider demonstrates, does not occur randomly throughout the city; rather, murders have been racialized and spatialized, concentrated in the low-income African American populations living within particular neighborhoods. In The Ecology of Homicide, Schneider tracks the history of murder in Philadelphia during a critical period from World War II until the early 1980s, focusing on the years leading up to and immediately following the 1966 Miranda Supreme Court decision and the shift to easier gun access and the resulting spike in violence that followed.

Examining the transcripts of nearly two hundred murder trials, The Ecology of Homicide presents the voices of victims and perpetrators of crime, as well as the enforcers of the law—using, to an unprecedented degree, the words of the people who were actually involved. In Schneider's hands, their perspectives produce an intimate record of what was happening on the streets of Philadelphia in the decades from 1940 until 1980, describing how race factored into everyday life, how corrosive crime was to the larger community, how the law intersected with every action of everyone involved, and, most critically, how individuals saw themselves and others. Schneider traces the ways in which low-income African American neighborhoods became ever more dangerous for those who lived there as the combined effects of concentrated poverty, economic disinvestment, and misguided policy accumulated to sustain and deepen what he calls an "ecology of violence," bound in place over time.

Covering topics including gender, urban redevelopment, community involvement, children, and gangs, as well as the impact of violence perpetrated by and against police, The Ecology of Homicide is a powerful link between urban history and the contemporary city.

"Focused on homicide and policing in postwar Philadelphia’s economically deprived Black neighborhoods, this volume by the late Schneider masterfully unveils an urban ecology spawning human conflict and violent death. It is an intriguing case study."—Choice