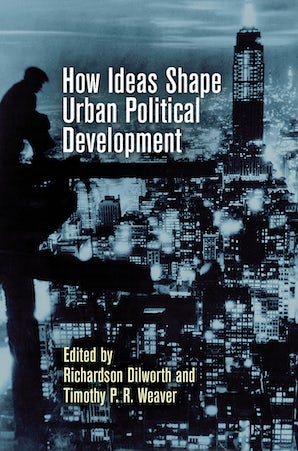 Ideas, interests, and institutions are the "holy trinity" of the study of politics. Of the three, ideas are arguably the hardest with which to grapple and, despite a generally broad agreement concerning their fundamental importance, the most often neglected. Nowhere is this more evident than in the study of urban politics and urban political development.

The essays in How Ideas Shape Urban Political Development argue that ideas have been the real drivers behind urban political development and offer as evidence national and international examples—some unique to specific cities, regions, and countries, and some of global impact. Within the United States, contributors examine the idea of "blight" and how it became a powerful metaphor in city planning; the identification of racially-defined spaces, especially black cities and city neighborhoods, as specific targets of neoliberal disciplinary practices; the paradox of members of Congress who were active supporters of civil rights legislation in the 1950s and 1960s but enjoyed the support of big-city political machines that were hardly liberal when it came to questions of race in their home districts; and the intersection of national education policy, local school politics, and the politics of immigration. Essays compare the ways in which national urban policies have taken different shapes in countries similar to the United States, namely, Canada and the United Kingdom. The volume also presents case studies of city-based political development in Chile, China, India, and Africa—areas of the world that have experienced a more recent form of urbanization that feature deep and intimate ties and similarities to urban political development in the Global North, but which have occurred on a broader scale.

"Richardson Dilworth and Timothy P. R. Weaver are absolutely right to call for greater attention to the role of ideas in urban political development, and they present their argument effectively. The essays in this volume illustrate convincingly that we cannot understand key episodes in urban political development without attention to ideas."—Jack Lucas, University of Calgary

"This far-ranging collection of essays makes an eloquent, powerful case for the importance of ideas in urban governance. Richardson Dilworth and Timothy P. R. Weaver's volume points the way toward vital new areas of research in urban politics and history."—Mason B. Williams, Williams College