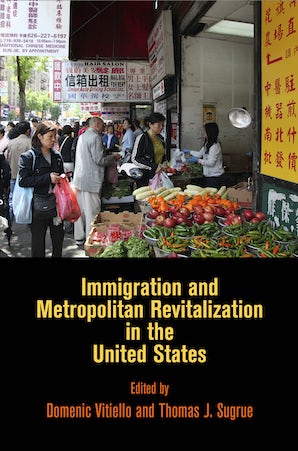 Immigration and Metropolitan Revitalization in the United States

In less than a generation, the dominant image of American cities has transformed from one of crisis to revitalization. Poverty, violence, and distressed schools still make headlines, but central cities and older suburbs are attracting new residents and substantial capital investment. In most accounts, native-born empty nesters, their twentysomething children, and other educated professionals are credited as the agents of change. Yet in the past decade, policy makers and scholars across the United States have come to understand that immigrants are driving metropolitan revitalization at least as much and belong at the center of the story. Immigrants have repopulated central city neighborhoods and older suburbs, reopening shuttered storefronts and boosting housing and labor markets, in every region of the United States.

Immigration and Metropolitan Revitalization in the United States is the first book to document immigrant-led revitalization, with contributions by leading scholars across the social sciences. Offering radically new perspectives on both immigration and urban revitalization and examining how immigrants have transformed big cities such as New York, Chicago, and Los Angeles, as well as newer destinations such as Nashville and the suburbs of Boston and New Jersey, the volume's contributors challenge traditional notions of revitalization, often looking at working-class communities. They explore the politics of immigration and neighborhood change, demolishing simplistic assumptions that dominate popular debates about immigration. They also show how immigrants have remade cities and regions in Latin America, Africa, and other places from which they come, linking urbanization in the United States and other parts of the world.

"This volume brings together cutting-edge research on revitalization from leading social scientists across a range of fields, from demography and economics to geography, history, sociology, and urban planning. . . . An important book with implications for today's cities and municipalities-both those experienced with immigration and those facing fresh change."—Audrey Singer, Urban Institute