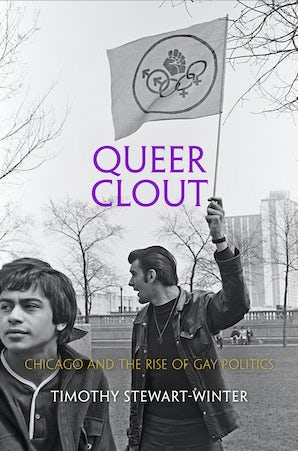 Chicago and the Rise of Gay Politics

In postwar America, the path to political power for gays and lesbians led through city hall. By the late 1980s, politicians and elected officials, who had originally sought political advantage from raiding gay bars and carting their patrons off to jail, were pursuing gays and lesbians aggressively as a voting bloc—not least by campaigning in those same bars. Gays had acquired power and influence. They had clout.

Tracing the gay movement's trajectory since the 1950s from the closet to the corridors of power, Queer Clout is the first book to weave together activism and electoral politics, shifting the story from the coastal gay meccas to the nation's great inland metropolis. Timothy Stewart-Winter challenges the traditional division between the homophile and gay liberation movements, and stresses gay people's and African Americans' shared focus on police harassment. He highlights the crucial role of black civil rights activists and political leaders in offering white gays and lesbians not only a model for protest but also an opening to join an emerging liberal coalition in city hall. The book draws on diverse oral histories and archival records spanning half a century, including those of undercover vice and police red squad investigators, previously unexamined interviews by midcentury social scientists studying gay life, and newly available papers of activists, politicians, and city agencies.

As the first history of gay politics in the post-Stonewall era grounded in archival research, Queer Clout sheds new light on the politics of race, religion, and the AIDS crisis, and it shows how big-city politics paved the way for the gay movement's unprecedented successes under the nation's first African American president.

"Stewart-Winter traces alliances and counts votes like a veteran ward captain while also breathing humanity into his story with over thirty personally conducted oral histories. The result is a sweeping narrative that reperiodizes gay rights history, places queer activism at the center of urban political history, and provides a vivid portrait of the Chicagoans responsible for expanding gay rights in their city. . . . An essential book for scholars of sexuality, cities, freedom movements, and modern American politics."—American Historical Review

"Queer Clout is outstanding in its attention to the way identities and privilege shape activism. . . . A critical addition to both LGBTQ history and American urban history, racial politics, and social movements. Stewart-Winter's original analysis and accessible writing make this book easy to read and teach."—Journal of American History

"In focusing on Chicago-and moving away from the big events and figures that have dominated LGBT history so far-Stewart-Winter provides a fascinating insight into how gays and lesbians in other cities built their communities and political organizations. . . . [He] has produced an outstanding piece of scholarship, one that does an impressive amount of work in uncovering Chicago LGBT politics. This book represents a key foundation for any future work on LGBT politics and beyond."—Journal of Politics

"A must-read for those interested in social movements and American politics since the 1960s. Shifting attention from San Francisco and New York to the more representative Chicago, Queer Clout reveals the surprising coalitions that enabled LGBTQ voters to become a pivotal political constituency. Stewart-Winter tells a fascinating story, rich in inspiration and cautionary experiences alike."—Nancy MacLean, author of Freedom Is Not Enough: The Opening of the American Workplace

"Queer Clout is original, important, and unfailingly smart. It is the first archive-based study of urban gay politics between the 1960s and 1990s. Historians of sexuality, cities, and American politics will all need to read this book."—Robert Self, Brown University