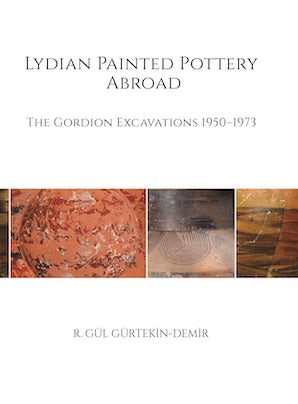 This book is the first major study of Lydian material culture at Gordion and also the first published monograph on Lydian painted pottery from any site excavation. Richly illustrated, it provides a comprehensive definition and analysis of Lydian ceramics based on stylistic, archaeological, and textual evidence, while thoroughly documenting the material’s stratigraphic contexts. The book situates the ceramic corpus within its broader Anatolian cultural context and offers insights into the impact of Lydian cultural interfaces at Gordion.

The Lydian pottery found at Gordion was largely produced at centers other than Sardis, the Lydian royal capital, although Sardian imports are also well attested and began to influence Gordion’s material culture as early as the 7th century BCE, if not before. Following the demise of the Lydian kingdom, a more limited repertoire of Lydian ceramics demonstrably continued in use at Gordion into the Achaemenid Persian period in the late 6th and 5th centuries BCE.

The material was excavated by Professor Rodney Young’s team between 1950 and 1973 and is fully presented here for the first time. Ongoing research in the decades following Young’s excavations has led to a more refined understanding of Gordion’s archaeological contexts and chronology, and, consequently, we are now able to view the Lydian ceramic corpus within a more secure stratigraphic framework than would have been the case if the material had been published shortly after the excavations.

"This handsome, specialist volume amounts to much more than the detailed catalogue of Lydian and Lydianizing pottery excavated by the late Rodney Young at the Phrygian capital of Gordion... Pottery remains the life-blood of archaeology, and this study has laid very strong foundations for the future study of Lydian influences beyond the borders of its homeland, within the regions west of the Halys River that it subjugated, and the extent of Lydian cultural influence in those same areas in the Achaemenid period down until at least the end of the fifth century BCE."—Bryn Mawr Classical Review