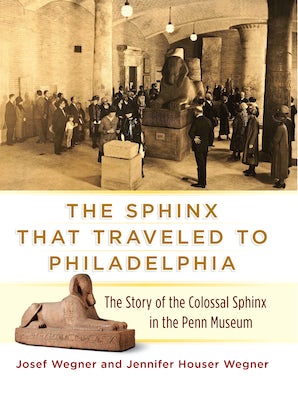 The Sphinx That Traveled to Philadelphia

The Story of the Colossal Sphinx in the Penn Museum

The book features ample illustrations—photographs, letters, newspaper stories, postcards, maps, and drawings—drawn largely from the extensive materials in the Museum Archives. Images of related artifacts in the Penn Museum's Egyptian collection and other objects from the Egyptian, Near East, and Mediterranean Sections (many not on view and some never before published), as well as pieces in museums in the United States, Europe, and Egypt, place the story of the Penn Museum Sphinx in a wider context. The writing style is informal and text is woven around the graphics that form the backbone of the narrative. The book is designed to be of interest to a wide audience of adult readers but accessible and engaging to younger readers as well.

"Exhaustively researched and filled with original documentation, the Wegners' new book invites the reader into the fascinating journey of the largest Egyptian sphinx in North America from its original home in the ancient capital of Memphis to its final destination in Philadelphia. Along the way, it tells the story of Egyptology at the turn of the twentieth century and introduces colorful characters and events that shaped the history of the University of Pennsylvania and the Penn Museum. It's clear that the authors have enjoyed their detective work; the result is an informative, engaging, and often amusing study that will appeal to Egyptophiles and non-Egyptophiles alike."—Denise Doxey, Curator, Ancient Egyptian, Nubian, and Near Eastern Art, Boston Museum of Fine Arts

"The full tale of the journey of the Penn Museum sphinx from Egypt to Philadelphia, detailing its discovery, voyages by sea and river, publicity for the general public and even the sphinx at the world series. Everything that one might wish to know about this iconic monument and its fame across continents can be found here. Sphinxtastic!"—Robert K. Ritner, Professor of Egyptology, The Oriental Institute, The University of Chicago