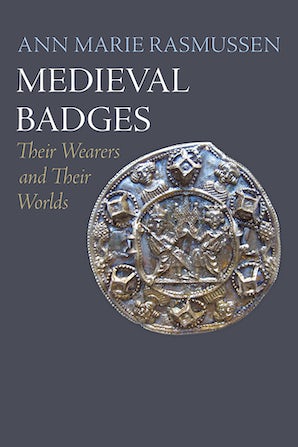 Their Wearers and Their Worlds

Mass-produced of tin-lead alloys and cheap to make and purchase, medieval badges were brooch-like objects displaying familiar images. Circulating widely throughout Europe in the High and late Middle Ages, badges were usually small, around four-by-four centimeters, though examples as tiny as two centimeters and a few as large as ten centimeters have been found. About 75 percent of surviving badges are closely associated with specific charismatic or holy sites, and when sewn or pinned onto clothing or a hat, they would have marked their wearers as having successfully completed a pilgrimage. Many others, however, were artifacts of secular life; some were political devices—a swan, a stag, a rose—that would have denoted membership in a civic organization or an elite family, and others—a garland, a pair of clasped hands, a crowned heart—that would have been tokens of love or friendship. A good number are enigmatic and even obscene. The popularity of badges seems to have grown steadily from the last decades of the twelfth century before waning at the very end of the fifteenth century. Some 20,000 badges survive today, though historians estimate that as many as two million were produced in the fourteenth and fifteenth centuries alone. Archaeologists and hobbyists alike continue to make new finds, often along muddy riverbanks in northern Europe.

Interdisciplinary in approach, and sumptuously illustrated with more than 115 color and black-and-white images, Medieval Badges introduces badges in all their variety and uses. Ann Marie Rasmussen considers all medieval badges, whether they originated in religious or secular contexts, and highlights the different ways badges could confer meaning and identity on their wearers. Drawing on evidence from England, France, the Low Countries, Germany, and Scandinavia, this book provides information about the manufacture, preservation, and scholarly study of these artifacts. From chapters exploring badges and pilgrimage, to the complexities of the political use of badges, to the ways the visual meaning-making strategies of badges were especially well-suited to the unique features of medieval cities, this book offers an expansive introduction of these medieval objects for a wide readership.

"Ann Marie Rasmussen offers a new approach to her subject, combining archaeological and literary sources in a way that has not been done before. Her understanding of the nature of medieval badges is profound and well argued."—Michael Andersen, National Museum of Denmark

"The book offers a through introduction to medieval badges that is both a solid work of scholarship and a joy to read."—Jennifer Lee, Indiana University-Purdue University Indianapolis