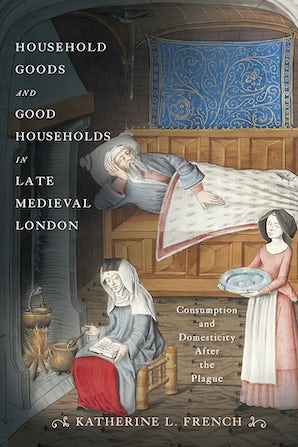 Consumption and Domesticity After the Plague

The Black Death that arrived in the spring of 1348 eventually killed nearly half of England's population. In its long aftermath, wages in London rose in response to labor shortages, many survivors moved into larger quarters in the depopulated city, and people in general spent more money on food, clothing, and household furnishings than they had before. Household Goods and Good Households in Late Medieval London looks at how this increased consumption reconfigured long-held gender roles and changed the domestic lives of London's merchants and artisans for years to come.

Grounding her analysis in both the study of surviving household artifacts and extensive archival research, Katherine L. French examines the accommodations that Londoners made to their bigger houses and the increasing number of possessions these contained. The changes in material circumstance reshaped domestic hierarchies and produced new routines and expectations. Recognizing that the greater number of possessions required a different kind of management and care, French puts housework and gender at the center of her study. Historically, the task of managing bodies and things and the dirt and chaos they create has been unproblematically defined as women's work. Housework, however, is neither timeless nor ahistorical, and French traces a major shift in women's household responsibilities to the arrival and gendering of new possessions and the creation of new household spaces in the decades after the plague.

"[W]as the plague the end of something, or the beginning? Was it the devastating calamity that ended two centuries of population growth and economic expansion in England, or the foundation of a new ‘golden age’ in the long 15th century (c.1380-1520) for workers, who leveraged their labour power into higher wages, a better quality of life and a mountain of consumer goods? Katherine French provides a new angle on these questions by considering domestic life and material culture in London...French’s evidence takes us into the emotional world of late medieval London, but her materials--all the sentimental wills and cold-eyed inventories--emphasise the pain of accumulation, the vexed moments at which objects are invested with an excessive love."—London Review of Books

"[A]n immensely evocative and rewarding study of the relationship between people and things in London between 1300 and 1540...One of the many strengths of Household Goods and Good Households in Late Medieval London lies in the manner in which French has brought together the textual evidence with the archaeological and museological record. The work as a whole provides a marvelous introduction to material culture in London before and after the Black Death, and a new framework for writing a history of the complex interactions between people and their material environment."—The Medieval Review

"Katherine L. French offers an original and convincing hypothesis about a distinctive mercantile and artisanal culture that is not merely emulative of elite consumption practices, but rather innovative and adaptive. Throughout, she explores the relationship between gender, 'stuff,' and the lifeways and rituals associated with household work, food, and childbirth. More broadly, she makes a powerful contribution to wider historical and sociological discussions about the relationship between people and their things."—Kate Giles, University of York