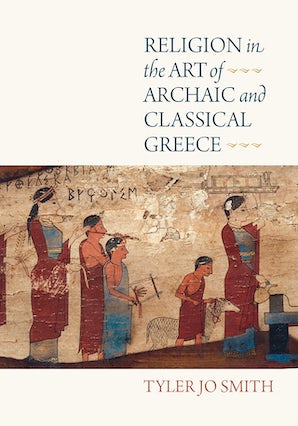 Religion in the Art of Archaic and Classical Greece

Art and religion are both well-attested and much-studied aspects of ancient Greek life, yet their relationship is not perfectly understood. Religion in the Art of Archaic and Classical Greece presents an important rethinking of these two categories. The book examines not only how and where religious activity is presented visually at particular moments and in certain forms, but also what objects and images can tell us about the experiences and impressions of Greek religion. Through an exploration of portable or relatively small-scale art forms—vases, figurines, gems, plaques—Tyler Jo Smith focuses on the visual and material evidence for religious life and customs in Archaic and Classical Greece (sixth to fourth centuries BC).

The book introduces its readers to categories of religious practice (e.g., sacrifices, votive offerings, funerals), to the pertinent artistic evidence for them, and to a range of scholarly approaches. Smith combines the study of iconography and the examination of material objects with theoretical perspectives on ritual and performance. When given visual form, religion holds much in common with other ancient Greek modes of artistic expression, including dance and drama. Religion is viewed here as a dynamic performative act, as an expression of connectivity, and as a mechanism of communication.

While the complexities of Greek religion cannot be discerned through the visual or material record alone, Religion in the Art of Archaic and Classical Greece frames a more nuanced reading of the artistic evidence than has been previously available. Richly illustrated with 216 halftones and sixteen color plates of mostly small-scale objects, the book is much more than a gathering of images and information in a single place. Taken as a whole, it argues for a visual and material tradition that is intended to express the ritualized practices and shared attitudes of religious life, a story that large public works alone are simply never going to tell.

"Smith’s synthesis will be a useful resource for undergraduate classes and newcomers to the topic of Greek religious art...Greek terms are always defined, and the prose is straightforward, with the result that the book will be accessible to most lay readers. Text-based scholars with little experience using Greek visual culture will find much to like in the book, given that it provides a primer in common religious artifacts and iconography, the role of composition, and how artists’ choices might be constrained by medium. As a basic survey of religious subject matter and ritual artifacts, Smith’s book provides a wide-ranging introduction to the iconography and artifacts of Greek religion."—American Journal of Archaeology

"There are many books that serve as introductions to Greek art, and others to Greek religion, but there are none comparable to this. Tyler Jo Smith's work fills a real gap by focusing simultaneously on the visualization of religion and on what art can tell us about religious experience."—Jan Bremmer, University of Groningen