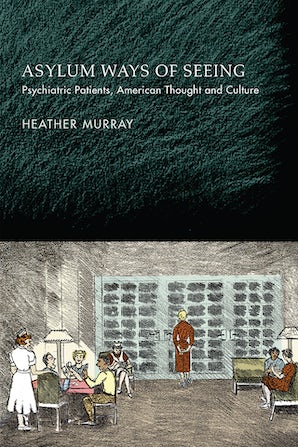 Asylum Ways of Seeing is a cultural and intellectual history of people with mental illnesses in the twentieth-century United States. While acknowledging the fraught, and often violent, histories of American psychiatric hospitals, Heather Murray also suggests that it is in these hospitals that patients became more intense observers: they gave more conscious consideration to institutional and broader kinds of citizenship, to the nature and needs of communities versus those of individuals, to scientific modernity, and to human rights and solidarities among the suffering. All of these ideas have animated twentieth-century America, and, as Murray shows, have not just flowed into psychiatric hospitals but outward from them as well. These themes are especially clear within patients' intimate, creative, and political correspondence, writings, and drawings, as well as in hospital publications and films.

This way of thinking and imagining contrasts with more common images of the patient—as passive, resigned, and absented from the world in the cloistered setting of the hospital—that have animated psychiatry over the course of the twentieth century. Asylum Ways of Seeing traces how it is that patient resignation went from being interpreted as wisdom in the early twentieth century, to being understood as a capitulation in scientific and political sources by mid-century, to being seen as a profound violation of selfhood and individual rights by the century's end. In so doing, it makes a call to reconsider the philosophical possibilities within resignation.

Introduction
Chapter 1. What Can't Be Cured Must Be Endured
Chapter 2. Biological Psychiatry and the "Happy Drone"
Chapter 3. Communities, Selfhood, and "Lonely Crowds"
Chapter 4. From Possessive to Expressive Individualism
Chapter 5. Liberating "Those Whose Ways Are Different"
Epilogue. Withdrawing from the Fray at the End of the Century

""Highly recommended...Murray explores the somewhat unusual premise that asylums and other residential psychiatric institutions can be places of citizenship that prompt the development of different (i.e., alternative) versions of culture...This is an illuminating read with powerful implications for those working in such facilities, and a must read for anyone who is either advocating for or treating residents of such facilities today."—Choice