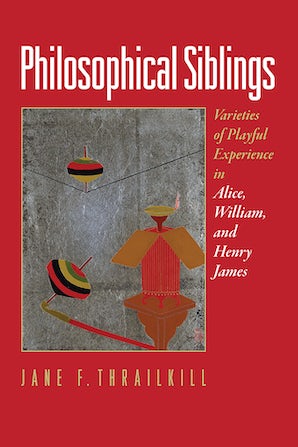 Varieties of Playful Experience in Alice, William, and Henry James

Alice James: an exemplary nineteenth-century neurasthenic and diarist. William James: a foundational figure for American psychology and philosophy. Henry James: a preeminent author and literary critic. These three iconic figures of nineteenth-century American culture and letters were also siblings, children of the storied James family, yet the diarist, the psychologist, and the novelist have seemed to occupy distinct realms of cultural authority and to speak to different audiences (or, in the case of Alice, to no audience at all). Their writings have rarely been considered together.

In Philosophical Siblings Jane F. Thrailkill asks what new story is illuminated when we study their writings collectively. By approaching the Jameses as intimate thinkers operating on a common field of play, Thrailkill reveals the siblings' shared project—part psychological, part philosophical—of showing how minds meet in a world teeming with possibilities and risks. Scientists in nineteenth-century psychology labs were studying isolated individuals, tracking eye movements, and timing reactions to better understand the human machine. In contrast, the Jameses' models for discovery were philosophical toys: ludic devices that light up quirks of perception and are devilishly fun as well. With childlike humor, the siblings' intellectual playfulness is both message and medium, manifested in an expressive style that exploits incongruity, delights in absurdities, and sometimes, teasingly, inflicts the sting of critique.

Most important, the Jameses' writings model how human beings accomplish high-wire acts of perception and creation. Alice, William, and Henry James did not merely present a new, interactive theory of mind; they dramatized it in their writings as a curiosity-based practice. Philosophical Siblings accepts their invitation to mindful play and offers a fresh way of thinking about literary encounters more generally, one that approaches even the weightiest texts with serious lightness.

"Written with elegance and clarity, using both intellectual history and sophisticated rhetorical analysis, this useful book shows how Alice, William, and Henry James participated in philosophical, scientific, technological, and literary trends of thought in the American (and sometimes British) 19th century. The concept of play that this book explains is not so much a matter of mood but rather a mode of theorizing experience. The book’s account of the relationships among the writings of the siblings compares them fruitfully."—Choice

"Jane Thrailkill offers a powerfully synthetic new account of the much-studied James family, but she also does much more. Although her account of the Jameses is consummate enough to convince any specialist, her book might fairly be said to take these writers as a jumping-off point for elaborating a dazzling theory of philosophizing as play-and vice versa."—Jennifer Fleissner, Indiana University