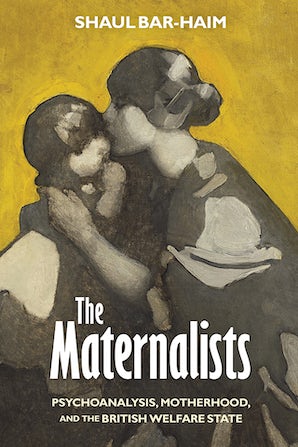 The Maternalists is a study of the hitherto unexplored significance of utopian visions of the state as a maternal entity in mid-twentieth century Britain. Demonstrating the affinities between welfarism, maternalism, and psychoanalysis, Shaul Bar-Haim suggests a new reading of the British welfare state as a political project.

After the First World War, British doctors, social thinkers, educators, and policy makers became increasingly interested in the contemporary turn being made in psychoanalytic theory toward the role of motherhood in child development. These public figures used new notions of the "maternal" to criticize modern European culture, and especially its patriarchal domestic structure. This strand of thought was pioneered by figures who were well placed to disseminate their ideas into the higher echelons of British culture, education, and medical care. Figures such as the anthropologists Bronislaw Malinowski and Geza Róheim, and the psychiatrist Ian Suttie—to mention only a few of the "maternalists" discussed in the book—used psychoanalytic vocabulary to promote both imagined perceptions of motherhood and their idea of the "real" essence of the "maternal." In the 1930s, as European fascism took hold, the "maternal" became a cultural discourse of both collective social anxieties and fantasies, as well as a central concept in many strands of radical, and even utopian, political thinking. During the Second World War, and even more so in the postwar era, psychoanalysts such as D. W. Winnicott and Michael Balint responded to the horrors of the war by drawing on interwar maternalistic thought, making a demand to "maternalize" British society, and providing postwar Britain with a new political idiom for defining the welfare state as a project of collective care.

Chapter 1. The "Sphincter-Morality" and Beyond: The Concept of Childhood in Interwar Psychoanalysis
Chapter 2. How Children Think: Susan Isaacs on "Primitive" Thinking
Chapter 3. Malinowski, Róheim, and the Maternal Shift in British Psychoanalysis and Anthropology
Chapter 4. Imagining the "Maternal" Past: Ian Suttie's Critique of Oedipal Culture
Chapter 5. What About Father? Civic-Republican Maternalism and the Welfare State
Chapter 6. "The Drug 'Doctor'": The Balint Movement and Psychosocial Medicine in Postwar Britain
Conclusion

"[The] ‘maternal turn’ in interwar psychoanalytic discourse in Britain, which was at the same time a turn from Freud to Klein, and its impact on postwar welfare policy, is the subject of Shaul Bar-Haim’s book. He argues that progressive ‘maternalistic’ thinkers from the interwar period involved in education, anthropology and the ‘psy’ professions connected new psychoanalytic ideas of motherhood to an ideal of the state as a maternal entity. The ‘maternal ethics’ of the period were a response to the horrors of the First World War and the emergence of fascism on the continent. In this figuration, motherhood is less a lived experience than a site of collective imaginings, a meeting point between private and public spaces. As Bar-Haim argues, women and mothers were the main intermediaries between the family and the state in its newly interventionist mode, through their encounters with GPs, social workers, psychotherapists and teachers."—London Review of Books

"Bar‐Haim sets out to demonstrate how much of what we think of as democracy was forged in conjunction with a cultural shift to valuing mothers. The book brings together several strands of existing historiography, such as the development of a relations‐based psychoanalysis from Freud's drive‐based model, the emergence of the mother figure within this new psychoanalysis, and the synergy between the new psychoanalysis and the welfare state…[T]he book's contribution is impressive. Deploying a multiplicity of primary and secondary sources, some of them archival and unpublished, Bar‐Haim presents a compelling account of a historical transformation in the consequences of which we all live. While surveying sources from various disciplines, he avoids both jargon and oversimplification: the essay remains nuanced and accessible throughout. And in a scholarly world that rewards a specialization‐to‐naught strategy, Bar‐Haim's opting for a broad lens is courageous."—The History of the Behavioral Sciences

"The Maternalists provides at once a highly original interpretation of key figures in post-Freudian psychoanalysis and a novel take on the ideas that animated the expansion and reformation of the British welfare state. In focusing on the efforts to ‘maternalize’ the state—indeed to ‘maternalize’ society as a whole—Shaul Bar-Haim fundamentally rewrites the story we thought we knew. But the book achieves yet more, as it returns to the once tightly intertwined evolutions of psychoanalysis and anthropology, and recovers indispensable, heretofore underappreciated anticolonial strands within the psychoanalytic tradition."—Dagmar Herzog, author of Unlearning Eugenics

"This is a fascinating and important book. Shaul Bar-Haim plumbs a variety of continental and British psychoanalytic thinkers, from Freud and Ferenczi to Winnicott and Balint, to illuminate the ways in which they helped shape the postwar welfare state with its decidedly maternal cast. The Maternalists is a riveting contribution both to our understanding of the social influence of psychoanalytic thought and the meanings of the welfare state."—Lisa Appignanesi, author of Mad, Bad, and Sad