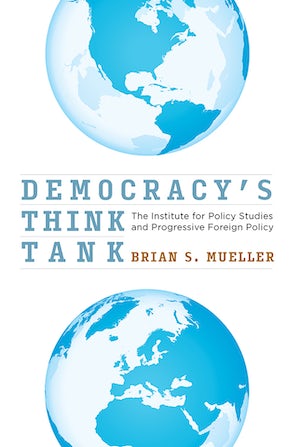 In Democracy's Think Tank, Brian S. Mueller places the Institute for Policy Studies (IPS) at the center of a network of activists involved in making the world safe for diversity. Unlike defense intellectuals at the RAND Corporation and other think tanks responsible for formulating military strategy, the "peace intellectuals" at IPS developed blueprints for an alternative to the U.S.-led world order.

As the Iron Curtain fell across Eastern Europe, a triumphalist Cold War narrative emerged proclaiming victory for freedom, democracy, and free enterprise over totalitarianism. Yet for the peace intellectuals at IPS, the occasion did not merit celebration. Since its doors opened in 1963, IPS refused to embrace American exceptionalism and waged a battle against the Cold War and its liberal anti-communist supporters. As IPS founders Marcus Raskin and Richard Barnet saw it, in the process of fighting communism and preserving the liberal capitalist order, Cold War liberals had forsaken democracy.

Democracy's Think Tank tells the story of IPS's crusade to resurrect democracy at home and abroad. Borrowing from populist, progressive, and New Left traditions, IPS challenged elite expertise and sought to restore power to "the people." To this end, IPS, in the words of journalist I. F. Stone, served as the "institute for the rest of us." Mueller tells the story of IPS's involvement in a broad range of grassroots campaigns aimed at ending the Cold War and increasing participatory democracy in the United States and across the globe. Contemporary observers seeking an alternative to American empire in the twenty-first century will find Democracy's Think Tank offers several possible paths toward a more democratic order.

Introduction. Peace Intellectuals Against Cold War Liberalism
Chapter 1. On a Mission to Save Liberalism
Chapter 2. A World Safe for Diversity: IPS's Road Map for a Post-Cold War Order
Chapter 3. Let the Dominoes Fall Where They May: Ideological Pluralism in Vietnam
Chapter 4. The National Security State and the Men Behind It
Chapter 5. Pocketbooks, Morality, and Human Rights
Chapter 6. A War for the World's Resources
Chapter 7. A Citizen's Army for a Post-Cold War Order
Chapter 8. Arms Control Is Not Disarmament
Epilogue. Reviving Democracy in Post-Cold War America

"In this highly intelligent, well-written, and very well-researched book, Brian S. Mueller offers the first comprehensive history of the Institute for Policy Studies [IPS], the leading progressive think tank whose presence on the liberal-left political scene in the United States from the 1960s through the 1980s was ubiquitous. The IPS stance was very much one of a responsible, rational, democratic opposition to the Cold War policies of the United States and to the Cold War itself. For Mueller, the vision of IPS thinkers remains relevant for us to today, worth considering as Americans and people around the world continue, in some ways, to search for a genuinely democratic international order."—Doug Rossinow, author of Visions of Progress: The Left-Liberal Tradition in America

"It was a pleasure to read Democracy's Think Tank, on the Institute for Policy Studies [IPS], a little-studied but important node in the Washington intellectual and policy establishment after its founding in the early 1960s. We have few studies of what we might call the institutional left, as opposed to social and political organizations, of the period. IPS is important to this discussion both for its longevity, as well as for the persistence of its progressive critique of both mainstream Republican and Democratic foreign policy currents, especially on human rights, nuclear policy, and the war in Vietnam."—Bradley Simpson, author of Economists with Guns: Authoritarian Development and U.S. Indonesian Relations, 1960-1968