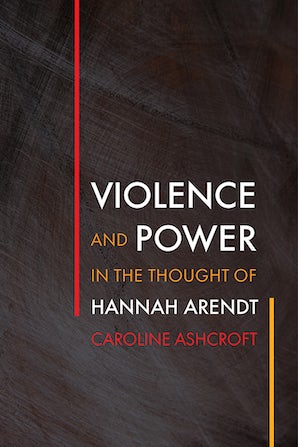 Violence and Power in the Thought of Hannah Arendt

Hannah Arendt was one of the foremost political theorists of the twentieth century to wrestle with the role of violence in public life. Yet remarkably, despite the fact that it was perhaps the most pressing issue of her era, this theme in her work has rarely been explored. In Violence and Power in the Thought of Hannah Arendt, Caroline Ashcroft deepens our understanding of Arendt's conception of the role of violence, offering a critical reading of her work and using it as a provocation to think about how we might engage with contemporary ideas.

Arendt has generally been thought to exclude acts of violence from "the political," based on her supposed idealization of ancient democratic politics. Ashcroft argues that Arendt has been widely misunderstood by both critics and advocates on this. By examining Arendt's thought on violence in key examples of political practice such as modern Jewish politics, the politics of Greece and Rome, and the French and American revolutions, Ashcroft reveals a more pragmatic notion of the place of violence in the political. She argues that what Arendt opposes in political violence is the use of force to determine politics, an idea central to modern sovereignty. What Arendt criticizes is not violence as such, but the misuse of violence and misunderstandings of politics which exclude participatory power altogether.

This work also engages with a wider set of concerns in political theory by obliging us to rethink the relations between violence and politics. Arendt's work offers a way to bridge the gulf between sovereign or realist politics and nonhierarchical, nonviolent participatory politics, and thus offers valuable resources for contemporary political theory.

Introduction
Chapter 1. The Modern State and Its Problems
Chapter 2. The Jewish Army and the Reconstruction of a People
Chapter 3. The Polis and the Res Publica
Chapter 4. Revolutionary Politics and the Unleashing of the Social
Chapter 5. Political Violence in Modernity
Chapter 6. A Politics of Nonviolence?
Chapter 7. A Space for the Political

"This is a theoretically daring thesis that challenges readers of Arendt’s work to think about violence politically—a conceptual framing that has historically been understood as a contradiction in terms...[T]hough this is an exceedingly well-argued and beautifully written book about (non)violence, it is also—and perhaps even more s —a text about how Arendt suggests we can, might, and should go about caring for the world, even if this means we need to be violent to do so."—Review of Politics