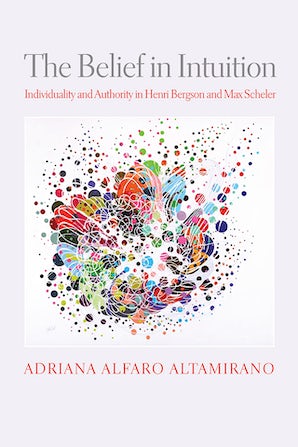 The Belief in Intuition

Individuality and Authority in Henri Bergson and Max Scheler

Within the Western tradition, it was the philosophers Henri Bergson and Max Scheler who laid out and explored the nonrational power of "intuition" at work in human beings that plays a key role in orienting their thinking and action within the world. As author Adriana Alfaro Altamirano notes, Bergon's and Scheler's philosophical explorations, which paralleled similar developments by other modernist writers, artists, and political actors of the early twentieth century, can yield fruitful insights into the ideas and passions that animate politics in our own time.

The Belief in Intuition shows that intuition (as Bergson and Scheler understood it) leads, first and foremost, to a conception of freedom that is especially suited for dealing with hierarchy, uncertainty, and alterity. Such a conception of freedom is grounded in a sense of individuality that remains true to its "inner multiplicity," thus providing a distinct contrast to and critique of the liberal notion of the self.

Focusing on the complex inner lives that drive human action, as Bergson and Scheler did, leads us to appreciate the moral and empirical limits of liberal devices that mean to regulate our actions "from the outside." Such devices, like the law, may not only carry pernicious effects for freedom but, more troublingly, oftentimes "erase their traces," concealing the very ways in which they are detrimental to a richer experience of subjectivity.

According to Alfaro Altamirano, Bergson's and Scheler's conception of intuition and personal authority puts contemporary discussions about populism in a different light: It shows that liberalism would only at its own peril deny the anthropological, moral, and political importance of the bearers of charismatic authority. Personal authority thus understood relies on a dense, but elusive, notion of personality, for which personal authority is not only consistent with freedom, but even contributes to it in decisive ways.