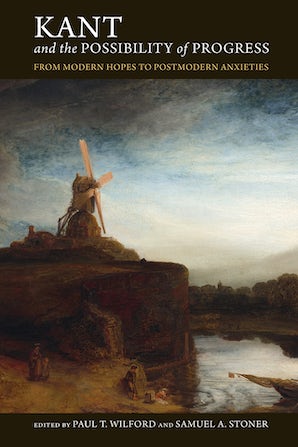 Kant and the Possibility of Progress

From Modern Hopes to Postmodern Anxieties

Immanuel Kant (1724-1804) transformed the philosophical, cultural, and religious landscape of modern Europe. Emphasizing the priority of practical reason and moral autonomy, Kant's radically original account of human subjectivity announced new ethical imperatives and engendered new political hopes. This collection of essays investigates the centrality of progress to Kant's philosophical project and the contested legacy of Kant's faith in reason's capacity to advance not only our scientific comprehension and technological prowess, but also our moral, political, and religious lives. Accordingly, the first half of the volume explores the many facets of Kant's thinking about progress, while the remaining essays each focus on one or two thinkers who play a crucial role in post-Kantian German philosophy: J. G. Herder (1744-1803), J. G. Fichte (1762-1814), G. W. F. Hegel (1770-1831), Søren Kierkegaard (1813-1855), Friedrich Nietzsche (1844-1900), Walter Benjamin (1892-1940), and Martin Heidegger (1889-1976). This two-part structure reflects the central thesis of the volume that Kant inaugurates a distinctive theoretical tradition in which human historicity is central to political philosophy.

By exploring the origins and metamorphoses of this tremendously influential tradition, the volume offers a timely perspective on fundamental questions in an age increasingly suspicious of the Enlightenment's promise of universal rational progress. It aims to help us face three sets of questions: (1) Do we still believe in the possibility of progress? If we do, on what grounds? If we do not, why have we lost the hope for a better future that animated previous generations? (2) Is the belief in progress necessary for the maintenance of today's liberal democratic order? Does a cosmopolitan vision of politics ultimately depend on a faith in humanity's gradual, asymptotic realization of that lofty aim? (3) And, if we no longer believe in progress, can we dispense with hope without succumbing to despair?

"This excellent volume offers a comprehensive examination of Kant’s writings on historical progress, as well as insightful commentaries on his work’s afterlife...[T]his is an unquestionably valuable collection for understanding the ins and outs of Kant’s approach to progress, as well as the residue of his thought in subsequent philosophy. More can and should be written on the subject; this volume provides an important foundation for any subsequent inquiry."—Perspectives on Politics

"From Immanuel Kant through Walter Benjamin, philosophy of history was a vital way of grappling with the question 'what may I hope?' This incisive volume of essays is both a splendid guide for exploring these enduringly important discussions and a timely call to investigate them anew."—Isaac Nahkimovsky, Yale University

"Paul T. Wilford and Samuel A. Stoner have put together an outstanding collection of essays by top-notch philosophers on the topic of progress in world history. Although Kant's philosophy of history is the center of attention, nearly half of the essays consider the treatment of progress by figures such as Fichte, Hegel, and Kierkegaard."—Sally Sedgwick, Boston University

"Kant was not an optimist, exactly, but he did think that there are rational grounds for hope regarding the long-term ethical and political progress of our species. This expertly curated volume provides a critical examination of Kant's own account, as well as of the various ways it was appropriated in the post-Kantian context. A highly recommended and accessible resource for anyone interested in politics, the philosophy of history, and the philosophy of religion."—Andrew Chignell, Princeton University