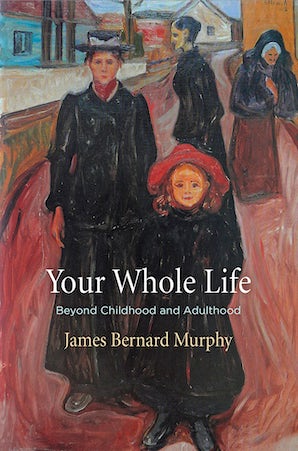 Beyond Childhood and Adulthood

A holistic view of human development that rejects the conventional stages of childhood, adulthood, and old age

When we talk about human development, we tend to characterize it as proceeding through a series of stages in which we are first children, then adolescents, and finally, adults. But as James Bernard Murphy observes, growth is not limited to the young nor is decline limited to the aged. We are never trapped within the horizon of a particular life stage: children anticipate adulthood and adults recapture childhood. According to Murphy, the very idea of stages of life undermines our ability to see our lives as a whole.

Engaging with the work of Aristotle, Augustine, Jesus, and Rousseau, as well as with the contributions of contemporary evolutionary biologists and psychologists, Murphy challenges the widely shared assumptions in Western thinking about personhood and its development through discrete stages of childhood, adulthood, and old age. He offers, instead, a holistic view in which we are always growing and declining, always learning and forgetting, and always living and dying, and finds that only in relation to one's whole life does the passing of time obtain meaning.

Introduction. The Story of Your Life

Part II. Unifying the Whole
Chapter 6. All of Me: Stages and the Whole of Life
Chapter 7. What Am I? Human Beings and Human Persons
Chapter 8. Who Am I? A Storybook Life

"James Bernard Murphy's readings of Aristotle, Augustine, Rousseau, and the Synoptic Gospels are unquestionably brilliant, and especially brilliant is how he draws on the discipline of evolutionary biology to organize them within a coherent intellectual framework. The depth at which he reflects on the big issues of human existence and the originality of his insights are marvelous."—Ronald Beiner, University of Toronto

"Combining scholarship from philosophy, biology, sociology, psychology, and theology with truisms of common sense and popular culture, Your Whole Life provides a nuanced and intriguing portrait of the human person. Accessible and engaging, this book will be of interest not only to specialists but also to readers interested in thinking about how to live more wisely."—Marya Schechtman, University of Illinois at Chicago