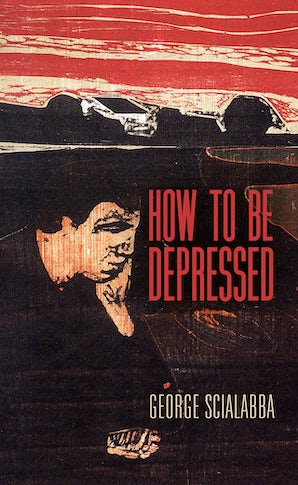 How To Be Depressed

An unusual, searching, and poignant memoir of one man's quest to make sense of depression

George Scialabba is a prolific critic and essayist known for his incisive, wide-ranging commentary on literature, philosophy, religion, and politics. He is also, like millions of others, a lifelong sufferer from clinical depression. In How To Be Depressed, Scialabba presents an edited selection of his mental health records spanning decades of treatment, framed by an introduction and an interview with renowned podcaster Christopher Lydon. The book also includes a wry and ruminative collection of "tips for the depressed," organized into something like a glossary of terms—among which are the names of numerous medications he has tried or researched over the years. Together, these texts form an unusual, searching, and poignant hybrid of essay and memoir, inviting readers into the hospital and the therapy office as Scialabba and his caregivers try to make sense of this baffling disease.

In Scialabba's view, clinical depression amounts to an "utter waste." Unlike heart surgery or a broken leg, there is no relaxing convalescence and nothing to be learned (except, perhaps, who your friends are). It leaves you weakened and bewildered, unsure why you got sick or how you got well, praying that it never happens again but certain that it will. Scialabba documents his own struggles and draws from them insights that may prove useful to fellow-sufferers and general readers alike. In the place of dispensable banalities—"Hold on," "You will feel better," and so on—he offers an account of how it's been for him, in the hope that doing so might prove helpful to others.

Scialabba has spent most of his career watching his country fall apart: grandiose adventurism abroad, wealth concentrated in ever fewer hands, meanness and cruelty exalted as civic virtues. Somehow he has not given up hope of progress, and the battered optimism of his other books is all the more moving when read in light of this one...His experience, painstakingly recorded, is not remotely glamorous. He has been to hell, many times, but emerged with no unexpected insights, nor any confidence that he will not return there. The only comfort he has to offer is that depression, if it does not kill you, will eventually lift—at least for a time.

"—The New York Review of Books

"A new memoir by George Scialabba, an unsung giant of criticism, is a gripping portrait of life under the spell of depression-and also a model of true intellectual inquiry . . . [O]ne is grateful for the characteristically insightful and socially committed thought that Scialabba brings to the thorny issue of clinical depression."—The American Interest

"[A] brilliant and unusual contribution to the literature of depression . . . . . . By sharing his struggles, Scialabba has provided not just a profound account of depression, but a reminder of how precarious our lives can be, and how much we need each other . . . Scialabba is one of the best social critics of our time."—Commonweal

"Scialabba has been one of the finest observers of American politics and culture since the 1980s; his essays and reviews, on everything from Vietnam to Christopher Lasch to the Bush/Cheney administration to the aftermath of the Great Recession, are a rich education..{T]his is one of the better books on depression that has appeared since the turn of the century, and it belongs in the Scialabba collected library that hopefully a scholar will compile someday.""—Los Angeles Review of Books

"Intentionally or not, this book is a devastating critique of psychiatry. At its center is a brilliant man struggling for decades with intractable depression. While he writhes in agony, his therapists toss out sometimes contradictory diagnoses, try every possible drug, and compulsively recalibrate dosages. But year in and year out, their patient's actual experience continues to elude them. Still, I finished How To Be Depressed with hope that psychiatry can change-if its practitioners are willing to listen, really listen, to patients like Scialabba."—Barbara Ehrenreich, author of Natural Causes

"This is the most shocking report on lifelong depression I have ever read: the depression intractable, the report heartbreaking"—Vivian Gornick, author of The Odd Woman and the City

"A remarkable achievement. Assembling a collage of essay, interview, and his own medical records, George Scialabba remakes the memoir of depression. I can't think of another book that is so successful in evoking the relentlessness of recurrent depression. We see it for what it is: painful, tedious, and debilitating, able to interfere with every aspect of life."—Peter D. Kramer, author of Listening to Prozac