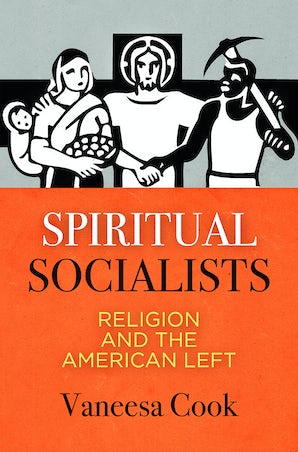 Religion and the American Left

Refuting the common perception that the American left has a religion problem, Vaneesa Cook highlights an important but overlooked intellectual and political tradition that she calls "spiritual socialism." Spiritual socialists emphasized the social side of socialism and believed the most basic expression of religious values—caring for the sick, tired, hungry, and exploited members of one's community—created a firm footing for society. Their unorthodox perspective on the spiritual and cultural meaning of socialist principles helped make leftist thought more palatable to Americans, who associated socialism with Soviet atheism and autocracy. In this way, spiritual socialism continually put pressure on liberals, conservatives, and Marxists to address the essential connection between morality and social justice.

Cook tells her story through an eclectic group of activists whose lives and works span the twentieth century. Sherwood Eddy, A. J. Muste, Myles Horton, Dorothy Day, Henry Wallace, Pauli Murray, Staughton Lynd, and Martin Luther King, Jr. spoke and wrote publicly about the connection between religious values and socialism. Equality, cooperation, and peace, they argued, would not develop overnight, and a more humane society would never emerge through top-down legislation. Instead, they believed that the process of their vision of the world had to happen in homes, villages, and cities, from the bottom up.

By insisting that people start treating each other better in everyday life, spiritual socialists transformed radical activism from projects of political policy-making to grass-roots organizing. For Cook, contemporary public figures such as Senator Bernie Sanders, Pope Francis, Reverend William Barber, and Cornel West are part of a long-standing tradition that exemplifies how non-Communist socialism has gained traction in American politics.

Introduction. Cultivating the Kingdom of God
Chapter 1. Reconstructing Socialism in the Wake of World War I
Chapter 2. The Kingdom of God in the City and the Country
Chapter 3. Spiritual Power and the Kingdom Abroad
Chapter 4. The Religious Left and the Red Scare
Chapter 5. Socialism of the Heart
Conclusion. Spiritual Socialists in the Twenty-First Century

"[I]n her thought-provoking new book . . . Cook finds in the past ample evidence that the intersection of Christianity and radicalism in the modern United States has been quite bustling . . . Cook has done . . . a tremendous service . . . in lifting up a spiritual-socialist tradition that has languished too long in obscurity."—Christianity Today

Spiritual Socialists should fundamentally change the way we tell the story of the twentieth-century Left.. In [Cook's] careful retelling, the 1930s–1950s were generative years for radicalism in the United States....The book, which is an intellectual history of the major figures of the religious left, makes a number of important contributions.

"—Journal of Church and State

"In this bold, incisive book, Vaneesa Cook makes an important contribution to the growing body of scholarship on the American ‘Religious Left.’ She argues that the most effective movements of the political left in the twentieth-century United States were thoroughly suffused with religious values… Cook’s study makes a compelling argument that religion has profoundly shaped American society, not merely guiding radical politics but being inextricably embedded in them."—American Religion

"Writing gracefully and powerfully, Vaneesa Cook draws on her understanding of history to speak to today's concerns without jargon or cant. Spiritual Socialists is a sweeping and refreshingly independent contribution to the study of the religious left in the modern United States."—Doug Rossinow, author of Visions of Progress: The Left-Liberal Tradition in America

"This is a courageous book. At a time when elected officials in the highest public offices refer to one another by offensive nicknames and attribute to each other the most self-seeking motives, and groups on the Left often attack each other in rigidly ideological invective, Vaneesa Cook seeks to recover 'the moral core of socialist belief.' She does so by examining the work of a group of figures, among them Dorothy Day, Sherwood Eddy, A. J. Muste, Myles Horton, Henry Wallace, Martin Luther King, Jr., and Pauli Murray. Her work exhibits diligence and empathy."—Staughton Lynd, author of Doing History from the Bottom Up: On E.P. Thompson, Howard Zinn, and Rebuilding the Labor Movement from Below