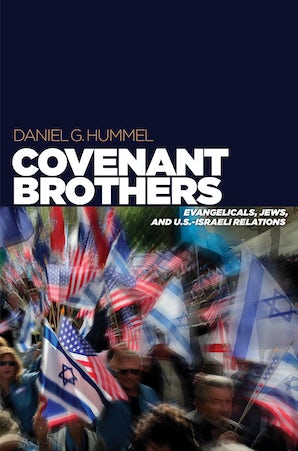 Weaving together the stories of activists, American Jewish leaders, and Israeli officials in the wake of the establishment of the state of Israel in 1948, Covenant Brothers portrays the dramatic rise of evangelical Christian Zionism as it gained prominence in American politics, Israeli diplomacy, and international relations after World War II. According to Daniel G. Hummel, conventional depictions of the Christian Zionist movement—the organized political and religious effort by conservative Protestants to support the state of Israel—focus too much on American evangelical apocalyptic fascination with the Jewish people. Hummel emphasizes instead the institutional, international, interreligious, and intergenerational efforts on the part of Christians and Jews to mobilize evangelical support for Israel.

From missionary churches in Israel to Holy Land tourism, from the Israeli government to the American Jewish Committee, and from Billy Graham's influence on Richard Nixon to John Hagee's courting of Donald Trump, Hummel reveals modern Christian Zionism to be an evolving and deepening collaboration between Christians and the state of Israel. He shows how influential officials in the Israeli Ministry of Religious Affairs and Foreign Ministry, tasked with pursuing a religious diplomacy that would enhance Israel's standing in the Christian world, combined forces with evangelical Christians to create and organize the vast global network of Christian Zionism that exists today. He also explores evangelicalism's embrace of Jewish concepts, motifs, and practices and its profound consequences on worshippers' political priorities and their relationship to Israel.

Drawing on religious and government archives in the United States and Israel, Covenant Brothers reveals how an unlikely mix of Christian and Jewish leaders, state support, and transnational networks of institutions combined religion, politics, and international relations to influence U.S. foreign policy and, eventually, global geopolitics.

"Hummel has written a masterful, very readable book that manages at once to mount a surprising argument and tell compelling narrative history."—The Forward

"Anyone seeking to understand the Palestine conflict and U.S. support for Israel needs to take seriously, as Daniel Hummel does in this excellent book, the American Christian Zionist movement."—Washington Report on Middle East Affairs

"[A] compelling, thoroughly researched argument that Christian Zionism has been first and foremost a Christian-Jewish reconciliation movement, with Israel at its center . . . Altogether, Covenant Brothers is going to prove indispensable to scholars of Christian Zionism and even Jewish-Christian relations writ large. And it is certainly accessible enough for nonspecialists seeking to understand the emergence of a movement currently enjoying unprecedented political sway during the Trump presidency, as well as for those interested in glimpsing at the movement's future."—H-Judaic

"Engagingly written and persuasively argued, Covenant Brothers is based on extraordinary primary research that amply demonstrates that we cannot understand U.S.-Israel relations without examining the impact Israel had on American opinion."—Andrew Preston, University of Cambridge

"Covenant Brothers is a smart, compelling, and pathbreaking book. The arguments are provocative, in the very best sense. Daniel G. Hummel challenges his readers to see their worlds in new ways. This deeply researched book will stand as the definitive study of American Christian Zionism for a long time to come."—Matthew Avery Sutton, Washington State University