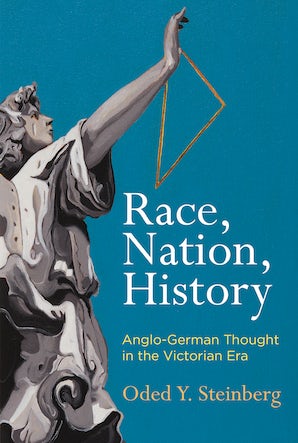 Anglo-German Thought in the Victorian Era

In Race, Nation, History, Oded Y. Steinberg examines the way a series of nineteenth-century scholars in England and Germany first constructed and then questioned the periodization of history into ancient, medieval, and modern eras, shaping the way we continue to think about the past and present of Western civilization at a fundamental level. Steinberg explores this topic by tracing the deep connections between the idea of epochal periodization and concepts of race and nation that were prevalent at the time—especially the role that Germanic or Teutonic tribes were assumed to play in the unfolding of Western history.

Steinberg shows how English scholars such as Thomas Arnold, Williams Stubbs, and John Richard Green; and German scholars such as Christian Karl Josias von Bunsen, Max Müller, and Reinhold Pauli built on the notion of a shared Teutonic kinship to establish a correlation between the division of time and the ascent or descent of races or nations. For example, although they viewed the Germanic tribes' conquest of the Roman Empire in A.D. 476 as a formative event that symbolized the transformation from antiquity to the Middle Ages, they did so by highlighting the injection of a new and dominant ethnoracial character into the decaying empire. But they also rejected the idea that the fifth century A.D. was the most decisive era in historical periodization, advocating instead for a historical continuity that emphasized the significance of the Germanic tribes' influence on the making of the nations of modern Europe. Concluding with character studies of E. A. Freeman, James Bryce, and J. B. Bury, Steinberg demonstrates the ways in which the innovative schemes devised by this community of Victorian historians for the division of historical time relied on the cornerstone of race.

"What makes a historical period? This is the question at the heart of Race, Nation, History, Oded Y. Steinberg’s original and richly textured book about the problem of what he calls 'racial time' during the nineteenth century...As a refreshing study in the relationship between nineteenth-century debates and the creation of influential categories of historical analysis, the book should become essential reading for scholars of nineteenth-century historical consciousness and the period’s racial imaginary. It also provides an example of the ways in which modern historians may think beyond national contexts, without neglecting them."—Victorian Studies

"Steinberg’s study makes a simple yet radical claim: conceptions of race and racial perceptions of time played dominant roles in the development of historical periodization and the foundation of the modern European discipline of history...[Race, Nation, History] should prompt new forms of self-reflection by scholars today about their own assumptions and presuppositions about the flow and divisions of the past, how they imagine watershed moments and historical periodization, and why they prefer certain versions over others."—The Marginalia Review of Books

"Oded Y. Steinberg's original and painstaking examination of the views of Anglo-German historians makes an important contribution to our understanding of the debates regarding the link between history, nation, and race. His insights into the relationships, influences, and characteristics of this community of 'Teutonic' historians are remarkable."—Athena S. Leoussi, University of Reading