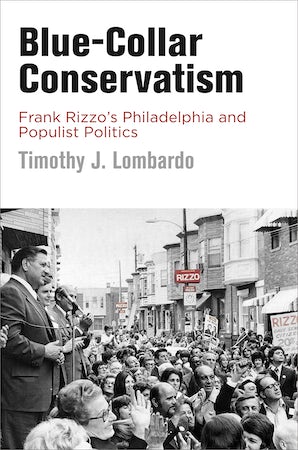 The postwar United States has experienced many forms of populist politics, none more consequential than that of the blue-collar white ethnics who brought figures like Ronald Reagan and Donald Trump to the White House. Blue-Collar Conservatism traces the rise of this little-understood, easily caricatured variant of populism by presenting a nuanced portrait of the supporters of Philadelphia Mayor Frank Rizzo.

In 1971, Frank Rizzo became the first former police commissioner elected mayor of a major American city. Despite serving as a Democrat, Rizzo cultivated his base of support by calling for "law and order" and opposing programs like public housing, school busing, affirmative action, and other policies his supporters deemed unearned advantages for nonwhites. Out of this engagement with the interwoven politics of law enforcement, school desegregation, equal employment, and urban housing, Timothy J. Lombardo argues, blue-collar populism arose.

Based on extensive archival research, and with an emphasis on interrelated changes to urban space and blue-collar culture, Blue-Collar Conservatism challenges the familiar backlash narrative, instead contextualizing blue-collar politics within postwar urban and economic crises. Historian and Philadelphia-native Lombardo demonstrates how blue-collar whites did not immediately abandon welfare liberalism but instead selectively rejected liberal policies based on culturally defined ideas of privilege, disadvantage, identity, and entitlement. While grounding his analysis in the postwar era's familiar racial fissures, Lombardo also emphasizes class identity as an indispensable driver of blue-collar political engagement. Blue-Collar Conservatism ultimately shows how this combination of factors created one of the least understood but most significant political developments in recent American history.

PART I. FROM LIBERALISM TO LAW AND ORDER
Chapter 1. City of "Neighborhoods" and "Jungles"
Chapter 2. Grassroots Law and Order
Chapter 3. "This Man Is the City's Salvation"
Chapter 4. Philadelphia Plans

"Detailed [and] lucid . . . Lombardo writes Blue-Collar Conservatism with detachment, allowing the words, deeds, and images to speak for themselves. It's one of the great strengths of the book. The writing is straightforward, and the viewpoint seems inarguable. What moves you is the story, even if you know a lot of it already."—The Philadelphia Inquirer

"The story of Philadelphia in the 1970s is a complicated one, and Lombardo tells it well in an academic book that is not overcrowded with academic jargon. H is well-researched analysis of blue-collar-conservatives, a confounding topic in recent years, is enlightening and bears on our own time as much as Rizzo's."—National Review

"Lombardo's ability to blend the social history of Philadelphia with the political history of Rizzo and his rivals is impressive, and it captures the significance of 1970s Philadelphia when situated within the broader story of conservatism."—Journal of Urban History

"Based on impressive original research and brimming with fresh insights, Blue-Collar Conservatism is a must-read book for anyone seeking to understand the origins and impact of 'law-and-order' politics in modern America."—Kevin M. Kruse, coauthor of Fault Lines: The History of America Since 1974

"This impressive book offers an important new interpretation in that it connects white-ethnic politics in Philadelphia and similar cities to the broader history of conservatism in a nuanced way that goes beyond standard narratives of backlash. Here, Timothy J. Lombardo shows that blue-collar conservatism emerged out of the interaction of culture, identity, neighborhood politics, and the interplay of race with spatial segregation in the city and the metropolitan region."—Guian McKee, University of Virginia

"As police commissioner and Philadelphia mayor, Frank Rizzo became a hero to blue-collar white ethnics and a villain to liberals and minorities. In this impressive study of the politics of race and place, identity and security, Timothy J. Lombardo astutely explains Rizzo's appeal and powerfully illuminates the urban roots of populist conservatism."—Michael Flamm, Ohio Wesleyan University