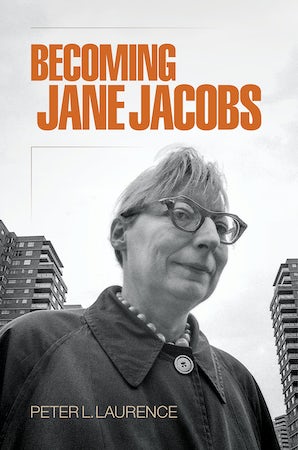 Jane Jacobs is universally recognized as one of the key figures in American urbanism. The author of The Death and Life of Great American Cities, she uncovered the complex and intertwined physical and social fabric of the city and excoriated the urban renewal policies of the 1950s. As the legend goes, Jacobs, a housewife, single-handedly stood up to Robert Moses, New York City's powerful master builder, and other city planners who sought first to level her Greenwich Village neighborhood and then to drive a highway through it. Jacobs's most effective weapons in these David-versus-Goliath battles, and in writing her book, were her powers of observation and common sense.

What is missing from such discussions and other myths about Jacobs, according to Peter L. Laurence, is a critical examination of how she arrived at her ideas about city life. Laurence shows that although Jacobs had only a high school diploma, she was nevertheless immersed in an elite intellectual community of architects and urbanists. Becoming Jane Jacobs is an intellectual biography that chronicles Jacobs's development, influences, and writing career, and provides a new foundation for understanding Death and Life and her subsequent books. Laurence explains how Jacobs's ideas developed over many decades and how she was influenced by members of the traditions she was critiquing, including Architectural Forum editor Douglas Haskell, shopping mall designer Victor Gruen, housing advocate Catherine Bauer, architect Louis Kahn, Philadelphia city planner Edmund Bacon, urban historian Lewis Mumford, and the British writers at The Architectural Review. Rather than discount the power of Jacobs's critique or contributions, Laurence asserts that Death and Life was not the spontaneous epiphany of an amateur activist but the product of a professional writer and experienced architectural critic with deep knowledge about the renewal and dynamics of American cities.

"Excellent. . . . One of the best books of the year. This is the biography of Jacobs I have wanted to read for forty years."—Tyler Cowen, Marginal Revolution

"Fascinating. . . . This scrupulously and minutely documented intellectual biography, based on extensive original archival research, set against a detailed history of urban policies adopted between the early Roosevelt and late Eisenhower administrations, reveals how the mind-set of the legendary author and activist was formed."—The Atlantic

"Architectural historian Peter Laurence aims to counter the notion that Jacobs was just a spunky naif who stumbled onto her theories about city planning and urban renewal. Instead, he argues, her views were shaped by years of careful study working as a writer and editor. . . . Becoming Jane Jacobs provides a crucial rebalancing of the public record."—Women's Review of Books

"Jane Jacobs taught the world to perceive the city with new eyes, but first she had to teach herself to see. In this superbly researched and wonderfully original book, Peter L. Laurence for the first time reveals the depth and complexity of Jacobs's self-education. As a writer, activist, and archetypal New Yorker, Jacobs put herself at the center of a debate on modernism that was also a profound struggle over the future of the American city. This book is both a worthy tribute to Jacobs's genius and a brilliant exposition of the broader context of designs and ideas that made her work possible."—Robert Fishman, University of Michigan

"Much has been written about Jane Jacobs over the years-from her audacious challenge to top-down urban planning approaches to her successes as a neighborhood activist in New York and later Toronto-but Peter Laurence is the first to account fully for the originality of her thinking and to provide a complex picture of her intellectual formation against the backdrop of urban America in the post-World War II decades. Deeply researched and richly illuminating, Laurence's book will fundamentally change the way we think about Jacobs today."—Joan Ockman, editor of Architecture Culture 1943-1968: A Documentary Anthology

"Peter Laurence peers behind Jane Jacobs's distinctive glasses to reveal a keen investigator, a synthesizing intellect, a poetic writer, and an unwavering conscience. Becoming Jane Jacobs adds immeasurably to our understanding of her rich, formative years in New York City, leading up to the publication of The Death and Life of Great American Cities."—Robert Wojtowicz, Old Dominion University