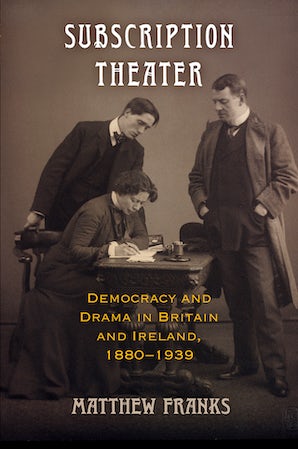 Subscription Theater asks why turn-of-the-century British and Irish citizens spent so much time, money, and effort adding their names to subscription lists. Shining a spotlight on private play-producing clubs, public repertory theaters, amateur drama groups, and theatrical magazines, Matthew Franks locates subscription theaters in a vast constellation of civic subscription initiatives, ranging from voluntary schools and workers' hospitals to soldiers' memorials and Diamond Jubilee funds. Across these enterprises, Franks argues, subscribers created their own spaces for performing social roles from which they had long been excluded. Whether by undermining the authority of the Lord Chamberlain's Examiner of Plays and London's commercial theater producers, or by extending rights to disenfranchised women and property-less men, a diverse cast of subscribers including typists, plumbers, and maids acted as political representatives for their fellow citizens, both inside the theater and far beyond it. Citizens prized a "democratic" or "representative" subscription list as an end in itself, and such lists set the stage for the eventual public subsidy of subscription endeavors.

Subscription Theater points to the importance of printed ephemera such as programs, tickets, and prospectuses in questioning any assumption that theatrical collectivity is confined to the live performance event. Drawing on new media as well as old, Franks uses a database of over 23,000 stage productions to reveal that subscribers introduced nearly a third of the plays that were most frequently revived between 1890 and the mid-twentieth century, as well as nearly half of all new translations, and they were instrumental in staging the work of such writers as Shaw and Ibsen, whose plays featured subscription lists as a plot point or prop. Although subscribers often are blamed for being a conservative force in theater, Franks demonstrates that they have been responsible for how we value audience and repertoire today, and their history offers a new account of the relationship between ephemera, drama, and democracy.

"Matthew Franks convincingly argues that subscription underlay the development of theater audience and repertoire in the modern period. His conclusions are original and make a substantial contribution to both theater history and print culture studies."—Elizabeth Carolyn Miller, University of California, Davis