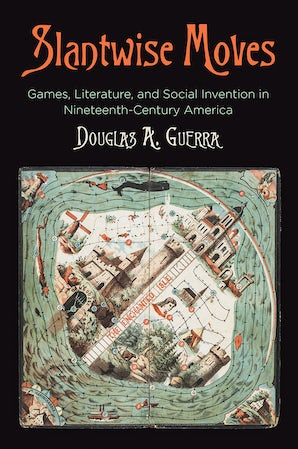 by Douglas A. Guerra

In 1860, Milton Bradley invented The Checkered Game of Life. Having journeyed from Springfield, Massachusetts, to New York City to determine interest in this combination of bright red ink, brass dials, and character-driven decision-making, Bradley exhausted his entire supply of merchandise just two days after his arrival in the city; within a few months, he had sold forty thousand copies. That same year, Walt Whitman left Brooklyn to oversee the printing of the third edition of his Leaves of Grass in Massachusetts. In Slantwise Moves, Douglas A. Guerra sees more than mere coincidence in the contemporary popularity of these superficially different cultural productions. Instead, he argues, both the book and the game were materially resonant sites of social experimentation—places where modes of collectivity and selfhood could be enacted and performed.

Then as now, Guerra observes, "game" was a malleable category, mediating play in various and inventive ways: through the material forms of pasteboard, paper, and india rubber; via settings like the parlor, lawn, or public hall; and by mutually agreed-upon measurements of success, ranging from point accumulation to the creation of humorous narratives. Recovering the lives of important game designers, anthologists, and codifiers—including Anne Abbot, William Simonds, Michael Phelan, and the aforementioned Bradley—Guerra brings his study of commercially produced games into dialogue with a reconsideration of iconic literary works. Through contrapuntal close readings of texts and gameplay, he finds multiple possibilities for self-fashioning reflected in Bradley's Life and Whitman's "Song of Myself," as well as utopian social spaces on billiard tables and the pages of Nathaniel Hawthorne's The Blithedale Romance alike.

Highlighting meaningful overlap in the production and reception of books and games, Slantwise Moves identifies what the two have in common as material texts and as critical models of the mundane pleasures and intimacies that defined agency and social belonging in nineteenth-century America.

"Slantwise Moves is an important contribution to a materialist history and analysis of the ideological work of amusement cultures in the United States . . . While scholars narrowly focused on video games may find the promise of some terms unfulfilled, Guerra presents a nuanced set of readings that has something to offer every scholar working along on the diagonal line of literature, games, and history."—Modern Philology

"Guerra offers an important advance in thinking about games in relation to the major currents of American history. More than a reflection of ideology or a product of social relations, games are sites where individuals could rehearse and transform their repertoires of social life."—American Journal of Play

"Slantwise Moves recovers forgotten nineteenth-century games from obscurity and interprets them as part of a history of American selfhood or agency, reading them against and in relation to other nineteenth-century cultural productions. This important and original book will prove compelling for Americanists, especially scholars of nineteenth-century literature and the history of the book, but will also find readers among anyone with an interest in games and game studies."—Lisa Gitelman, New York University