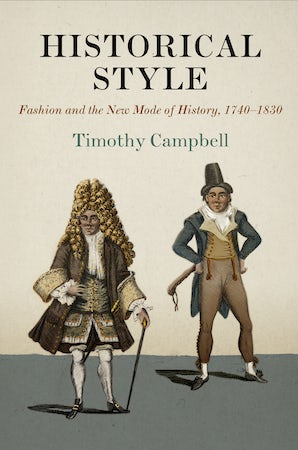 Historical Style connects the birth of eighteenth-century British consumer society to the rise of historical self-consciousness. Prior to the eighteenth century, British style was slow to change and followed the cultural and economic imperatives of monarchical regimes. By the 1750s, however, a growing fashion press extolled, in writing and illustration, the new phenomenon of periodized fashion trends. As fashion fads came in and out of style, and as fashion texts circulated and obsolesced, Britons were forced to confront the material persistence of out-of-date fashions. Timothy Campbell argues that these fashion texts and objects shaped British perception of time and history by producing new curiosity about the very recent past, as well as a new self-consciousness about the means by which the past could be understood.

In a panoptic sweep, Historical Style brings together art history, philosophy, and literary history to portray an era increasingly aware of itself. Burgeoning consumer society, Campbell contends, highlighted the distinction between the past and the present, created an expectation of continual change, and forged a sense of history as something that could be tracked through material objects. Campbell assembles a wide range of writings, images, and objects to render this eighteenth-century landscape: commercial dress displays and David Hume's ideas of novelty as historical form; popular illustrations of recent fashion trends and Sir Joshua Reynolds's aesthetic precepts; fashion periodicals and Sir Walter Scott's costume-saturated historical fiction. In foregrounding fashion to trace eighteenth-century historicism, Historical Style draws upon the interdisciplinary, multimedia archival impressions that fashionable dress has left behind, as well as the historical and conceptual resources within the field of fashion studies that literary and cultural historians of eighteenth-century and Romantic Britain have often neglected.

PART I. THE DRESS OF THE YEAR
Chapter 1. Modern Fashion and Comparative Contemporaneity
Chapter 2. Portrait Historicism and the Dress of the Times

"Our ideas of history are dependent upon lived temporalities shaped by commercial and material forces, and I have never seen this truth so solidly, aptly, and compellingly explicated as in Timothy Campbell's book."—Erin Mackie, Syracuse University