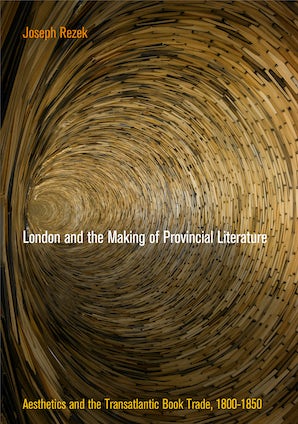 London and the Making of Provincial Literature

Aesthetics and the Transatlantic Book Trade, 18-185

In the early nineteenth century, London publishers dominated the transatlantic book trade. No one felt this more keenly than authors from Ireland, Scotland, and the United States who struggled to establish their own national literary traditions while publishing in the English metropolis. Authors such as Maria Edgeworth, Sydney Owenson, Walter Scott, Washington Irving, and James Fenimore Cooper devised a range of strategies to transcend the national rivalries of the literary field. By writing prefaces and footnotes addressed to a foreign audience, revising texts specifically for London markets, and celebrating national particularity, provincial authors appealed to English readers with idealistic stories of cross-cultural communion. From within the messy and uneven marketplace for books, Joseph Rezek argues, provincial authors sought to exalt and purify literary exchange. In so doing, they helped shape the Romantic-era belief that literature inhabits an autonomous sphere in society.

London and the Making of Provincial Literature tells an ambitious story about the mutual entanglement of the history of books and the history of aesthetics in the first three decades of the nineteenth century. Situated between local literary scenes and a distant cultural capital, enterprising provincial authors and publishers worked to maximize success in London and to burnish their reputations and build their industry at home. Examining the production of books and the circulation of material texts between London and the provincial centers of Dublin, Edinburgh, and Philadelphia, Rezek claims that the publishing vortex of London inspired a dynamic array of economic and aesthetic practices that shaped an era in literary history.

Introduction
Chapter 1. London and the Transatlantic Book Trade
Chapter 2. Furious Booksellers and the "American Copy" of the Waverley Novels
Chapter 3. The Irish National Tale and the Aesthetics of Union
Chapter 4. Washington Irving's Transatlantic Revisions
Chapter 5. The Effects of Provinciality in Cooper and Scott
Chapter 6. Rivalry with England in the Age of Nationalism
Epilogue. The Scarlet Letter and the Decline of London

"Joseph Rezek's . . . capacity to animate his research and his willingness to let it demonstrate complex, sometimes contradictory movements in literary history are entirely admirable features of this impressive first book."—Times Literary Supplement

"[A]mbitious and beautifully written . . . Rezek's evocative and wide-ranging analysis is a welcome exploration of the Anglophone literary world in the early nineteenth century."—Nineteenth-Century Contexts

"This excellent book is a must-read for scholars of the history of the book in the nineteenth century, especially for those interested in the Atlantic World."—Literature & History

"This work defies the nationalist parameters that organize the study of nearly all literature, whether British, American, postcolonial, or comparative. Scholars simply do not tend to think in these terms. London and the Making of Provincial Literature accordingly shines a bright light onto one of our critically blindest spots."—Jordan Alexander Stein, in Common-place

"Joseph Rezek's London and the Making of Provincial Literature is a landmark achievement in Atlantic literary studies . . . . Rezek's book deserves the widest possible audience, and should serve as reference point for all scholars of Irish, Scottish, and American literature who are interested in the Atlantic world or the history of the book."—The Wordsworth Circle

"An important and excellent book, of equal interest to specialist readers and to those unfamiliar with the story of how Scottish, Irish, and American literature arose in the shadow of London's literary power. Indebted to Bourdieu but working with a new method of his own, Rezek shows how it is still possible, in an oft visited landscape, to make extraordinary discoveries."—Pascale Casanova, author of The World Republic of Letters

"London and the Making of Provincial Literature makes a powerful case at two levels-joining book history to novel and literary production in so compelling a way and rewriting our understanding of the transatlantic anglophone literary exchange in eye-opening terms that will be of importance to future work in the history of the novel-while giving us a superb rethinking of the dynamics of Romantic-age fiction in the bargain."—NOVEL

"Joseph Rezek has written a fascinating and original study of the mutual entanglement of early nineteenth-century American, Irish, and Scottish literatures, understood for the first time as interlocking traditions shaped by their mutual struggle with the London book trade. His careful research, lively prose, and inventive readings of both newly salient and familiar, canonical texts will change how we think about early American literature."—Meredith McGill, Rutgers University