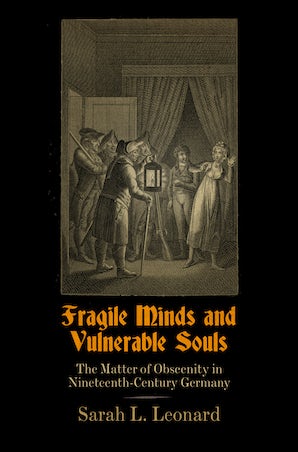 The Matter of Obscenity in Nineteenth-Century Germany

Fragile Minds and Vulnerable Souls investigates the creation of "obscene writings and images" as a category of print in nineteenth-century Germany. Sarah L. Leonard charts the process through which texts of many kinds—from popular medical works to stereoscope cards—were deemed dangerous to the intellectual and emotional lives of vulnerable consumers. She shows that these definitions often hinged as much on the content of texts as on their perceived capacity to distort the intellect and inflame the imagination.

Leonard tracks the legal and mercantile channels through which sexually explicit material traveled as Prussian expansion opened new routes for the movement of culture and ideas. Official conceptions of obscenity were forged through a heterogeneous body of laws, police ordinances, and expert commentary. Many texts acquired the stigma of immorality because they served nonelite readers and passed through suspect spaces; books and pamphlets sold by peddlers or borrowed from fly-by-night lending libraries were deemed particularly dangerous. Early on, teachers and theologians warned against the effects of these materials on the mind and soul; in the latter half of the century, as the study of inner life was increasingly medicalized, physicians became the leading experts on the detrimental side effects of the obscene. In Fragile Minds and Vulnerable Souls, Leonard shows how distinctly German legal and medical traditions of theorizing obscenity gave rise to a new understanding about the mind and soul that endured into the next century.

"Sarah Leonard's approach to the topic of obscenity in the German states is fresh, innovative, and sophisticated. It offers an entirely new reading of the history, arguing for a paradigmatic shift in the early to mid-nineteenth century. Her synthesis of the cultural, intellectual, social, and political histories of censorship and obscenity law is unusual, cutting-edge, and impressive."—Ann Goldberg, University of California, Riverside