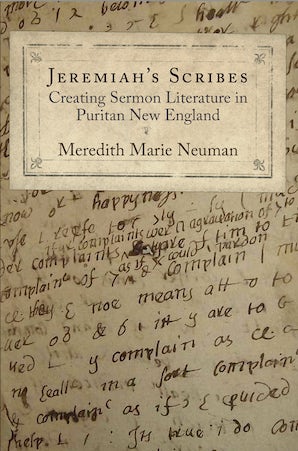 New England Puritan sermon culture was primarily an oral phenomenon, and yet its literary production has been understood mainly through a print legacy. In Jeremiah's Scribes, Meredith Marie Neuman turns to the notes taken by Puritan auditors in the meetinghouse in order to fill out our sense of the lived experience of the sermon. By reconstructing the aural culture of sermons, Neuman shifts our attention from the pulpit to the pew to demonstrate the many ways in which sermon auditors helped to shape this dominant genre of Puritan New England.

Tracing the material transmission of sermon texts by readers and writers, hearers and notetakers, Jeremiah's Scribes challenges the notion of stable authorship by individual ministers. Instead, Neuman illuminates a mode of textual production that pervaded communities and occurred in the overlapping media of print, manuscript, and speech. Even printed sermons, she demonstrates, bore the traces of their roots in the oral culture of the meetinghouse.

Bringing material considerations to bear on anxieties over the perceived relationship between divine and human language, Jeremiah's Scribes broadens our understanding of all Puritan literature. Neuman examines the controlling logic of the sermon in relation to nonsermonic writing—such as conversion narrative—ultimately suggesting the fundamental permeability among disparate genres of Puritan writing.

"A dazzlingly original account of New England sermon culture, the intertwined practices of reading, interpretation, preaching, note-taking, and print publication through which ministers and laypeople interacted with each other and with the biblical text. This outstanding study brings to life dusty sermon notebooks and weighty sermon series, revealing their theoretical complexities, their poetry, and even their humor, reshaping and enriching our understanding of Puritan New England's intertextual literary culture."—Lisa Gordis, Barnard College

"A polished, informative, and distinctively original study that will certainly become the book to read on sermons."—David D. Hall, Harvard Divinity School