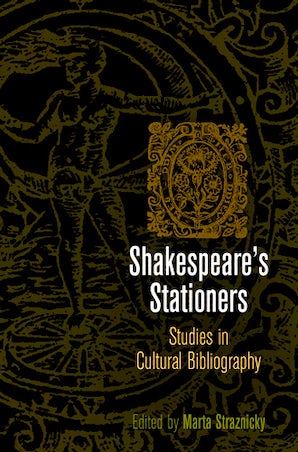 Recent studies in early modern cultural bibliography have put forth a radically new Shakespeare—a man of keen literary ambition who wrote for page as well as stage. His work thus comes to be viewed as textual property and a material object not only seen theatrically but also bought, read, collected, annotated, copied, and otherwise passed through human hands. This Shakespeare was invented in large part by the stationers—publishers, printers, and booksellers—who produced and distributed his texts in the form of books. Yet Shakespeare's stationers have not received sustained critical attention.

Edited by Marta Straznicky, Shakespeare's Stationers: Studies in Cultural Bibliography shifts Shakespearean textual scholarship toward a new focus on the earliest publishers and booksellers of Shakespeare's texts. This seminal collection is the first to explore the multiple and intersecting forms of agency exercised by Shakespeare's stationers in the design, production, marketing, and dissemination of his printed works. Nine critical studies examine the ways in which commerce intersected with culture and how individual stationers engaged in a range of cultural functions and political movements through their business practices. Two appendices, cataloguing the imprints of Shakespeare's texts to 1640 and providing forty additional stationer profiles, extend the volume's reach well beyond the case studies, offering a foundation for further research.

Introduction: What Is a Stationer?
—Marta Straznicky

"Offering a wealth of new evidence that stationers' decisions to print and publish Shakespeare were symptomatic of larger social, political, financial, and religious trends in the market and the world beyond the bookstall, Shakespeare's Stationers further solidifies the role of such agents in the development of Shakespeare as a playwright in print."—Sixteenth Century Journal

"This book presents nine subtle and significant essays written by a notable group of book historians. The contributors examine the ways in which pre-1640 stationers defined and refashioned Shakespeare within the field of print. . . . the contributors are deeply immersed in the delectations of the archive, and their researches bear rich fruit."—Renaissance Quarterly

"This is an original and substantial collection. The book is entirely timely."—Tiffany Stern, Oxford University

"The goal of this collection is nothing short of a fundamental shift in Shakespearean textual criticism, and it achieves this goal with aplomb. The essays are original, substantial, and make a genuine contribution to the field."—Eric Rasmussen, University of Nevada