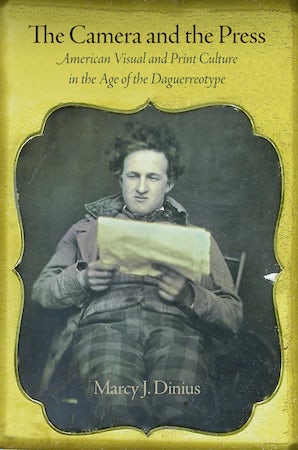 The Camera and the Press

American Visual and Print Culture in the Age of the Daguerreotype

Before most Americans ever saw an actual daguerreotype, they encountered this visual form through written descriptions, published and rapidly reprinted in newspapers throughout the land. In The Camera and the Press, Marcy J. Dinius examines how the first written and published responses to the daguerreotype set the terms for how we now understand the representational accuracy and objectivity associated with the photograph, as well as the democratization of portraiture that photography enabled.

Dinius's archival research ranges from essays in popular nineteenth-century periodicals to daguerreotypes of Americans, Liberians, slaves, and even fictional characters. Examples of these portraits are among the dozens of illustrations featured in the book. The Camera and the Press presents new dimensions of Nathaniel Hawthorne's The House of the Seven Gables, Herman Melville's Pierre, Harriet Beecher Stowe's Uncle Tom's Cabin, and Frederick Douglass's The Heroic Slave. Dinius shows how these authors strategically incorporated aspects of daguerreian representation to advance their aesthetic, political, and social agendas. By recognizing print and visual culture as one, Dinius redefines such terms as art, objectivity, sympathy, representation, race, and nationalism and their interrelations in nineteenth-century America.

Introduction
Chapter 1. The Daguerreotype in Antebellum American Popular Print
Chapter 2. Daguerreian Romanticism: The House of the Seven Gables and Gabriel Harrison's Portraits
Chapter 3. "Some ideal image of the man and his mind": Melville's Pierre and Southworth & Hawes's Daguerreian Aesthetic
Chapter 4. Slavery in Black and White: Daguerreotypy and Uncle Tom's Cabin
Chapter 5. "My daguerreotype shall be a true one": Augustus Washington and the Liberian Colonization Movement
Chapter 6. Seeing a Slave as a Man: Frederick Douglass, Racial Progress, and Daguerreian Portraiture
Epilogue. "An Old Daguerreotype"

"A consummate feat of scholarship and descriptive prose."—TLS

"An important and original study of interconnections between the daguerreotype and literary writing during the antebellum period. Dinius does a superb job of recovering the history of American responses to the daguerreotype, showing in particular the complex role of writing itself in that reception."—Robert S. Levine, University of Maryland

"The greatest accomplishment of The Camera and the Press is the way Dinius has put texts and images into conversation with one another. She argues that 'daguerreian discourse' was instrumental in refiguring American society and culture and offers some wonderful new encounters with the problems of photographic representation."—Lisa Gitelman, New York University