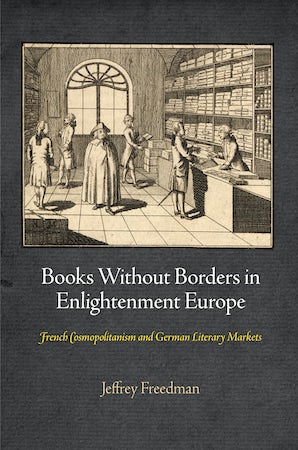 Books Without Borders in Enlightenment Europe

Though the field of book history has long been divided into discrete national histories, books have seldom been as respectful of national borders as the historians who study them—least of all in the age of Enlightenment when French books reached readers throughout Europe. In this erudite and engagingly written study, Jeffrey Freedman examines one of the most important axes of the transnational book trade in Enlightenment Europe: the circulation of French books between France and the German-speaking lands. Focusing on the critical role of book dealers as cultural intermediaries, he follows French books through each stage of their journey—from the French-language printing shops where they were produced, to the wholesale book fairs in Leipzig, to retail book shops at locations scattered widely throughout Germany. At some of those locations, authorities reacted with alarm to the spread of French books, burning works of the radical French Enlightenment and punishing the booksellers who sold them. But officials had little power to curtail their circulation: the political fragmentation of the German lands made it virtually impossible to police the book trade. Largely unimpeded by censorship, French books circulated more freely in Germany than in the absolutist monarchy of France.

In comparison, the flow of German books into the French market was negligible—an asymmetry that corresponded to the hierarchy of languages in Enlightenment Europe. But publishers in Switzerland produced French translations of German books. By means of title changes, creative editing, and mendacious advertising, the Swiss publishers adapted works of the German Enlightenment for an audience of French-readers that stretched from Dublin to Moscow.

An innovative contribution to both the history of the book and the transnational study of the Enlightenment, Freedman's work tells a story of crucial importance to understanding the circulation of texts in an age in which the concept of World Literature had not yet been invented, but the phenomenon already existed.

Note on Terminology and Sources

Introduction
Chapter 1. Rite of Spring: The Leipzig Easter Fair and the Literary Marketplace
Chapter 2. Whom to Trust? Insolvent Booksellers and the Problem of Credit
Chapter 3. French Booksellers in the Reich
Chapter 4. Demand
Chapter 5. The Word of God in the Age of the Encyclopédie
Chapter 6. Against the Current: Translating the Aufklärung
Chapter 7. From Europe Française to Europe Révolutionnaire: The Career of Jean-Guillaume Virchaux
Conclusion. What Were French Books Good For?

"Carefully reasoned and deeply researched . . . a welcome addition to the study of the myriad ways in which ideas have been carried in print across political, linguistic, and other barriers"—TLS

"An outstanding, vivid, fine-grained, minutely researched, and highly readable study that makes an indispensable contribution to our knowledge of the diffusion of the Enlightenment."—French Studies

"Anyone with any knowledge about eighteenth-century literary and cultural history will recognize the importance of this book. A study of this sort has long been needed not simply to extend our understanding of the French book in Germany but also to counterbalance and revise various national 'history of the book' series which focus on the national unit and precisely miss the importance of books as livres sans frontières."—James Raven, University of Essex