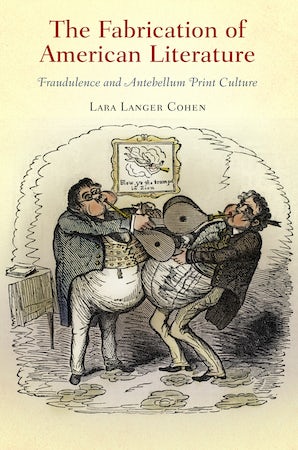 The Fabrication of American Literature

Literary histories typically celebrate the antebellum period as marking the triumphant emergence of American literature. But the period's readers and writers tell a different story: they derided literature as a fraud, an imposture, and a humbug, and they likened it to inflated currency, land bubbles, and quack medicine.

Excavating a rich archive of magazine fiction, verse satires, comic almanacs, false slave narratives, minstrel song sheets, and early literary criticism, and revisiting such familiar figures as Edgar Allan Poe, Davy Crockett, Fanny Fern, and Herman Melville, Lara Langer Cohen uncovers the controversies over literary fraudulence that plagued these years and uses them to offer an ambitious rethinking of the antebellum print explosion. She traces the checkered fortunes of American literature from the rise of literary nationalism, which was beset by accusations of puffery, to the conversion of fraudulence from a national dilemma into a sorting mechanism that produced new racial, regional, and gender identities. Yet she also shows that even as fraudulence became a sign of marginality, some authors managed to turn their dubious reputations to account, making a virtue of their counterfeit status. This forgotten history, Cohen argues, presents a dramatically altered picture of American literature's role in antebellum culture, one in which its authority is far from assured, and its failures matter as much as its achievements.

Introduction: American Literary Fraudulence
Chapter 1. "One Vast Perambulating Humbug": Literary Nationalism and the Rise of the Puffing System
Chapter 2. Backwoods and Blackface: The Strange Careers of Davy Crockett and Jim Crow
Chapter 3. "Slavery Never Can Be Represented": James Williams and the Racial Politics of Imposture
Chapter 4. Mediums of Exchange: Fanny Fern's Unoriginality
Conclusion: The Confidence Man on a Large Scale

"The Fabrication of American Literature is fresh and surprising in its arguments, and deeply learned in its scholarship. Antebellum American literature, we learn, was not just interested in the topic of fraudulence, it was itself fraudulent-and this is a good thing. I am confident that readers will be deeply interested and thoroughly impressed by Lara Langer Cohen's wonderful accomplishment."—Christopher Looby, University of California, Los Angeles

"Reader, this book is no fraud. In fact, Lara Langer Cohen's The Fabrication of American Literature not only carries its smart and consequential argument to very satisfyingly conclusive lengths but it also saves us many a yawn in doing so, with its showman's sense of pith and pace."—Nineteenth-Century Literature