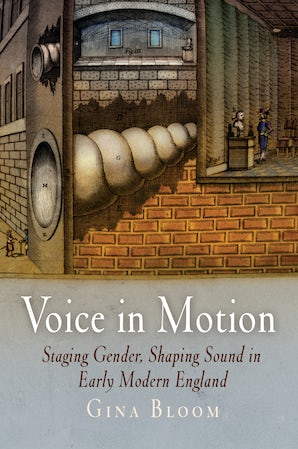 Voice in Motion explores the human voice as a literary, historical, and performative motif in early modern English drama and culture, where the voice was frequently represented as struggling, even failing, to work. In a compelling and original argument, Gina Bloom demonstrates that early modern ideas about the efficacy of spoken communication spring from an understanding of the voice's materiality. Voices can be cracked by the bodies that produce them, scattered by winds when transmitted as breath through their acoustic environment, stopped by clogged ears meant to receive them, and displaced by echoic resonances. The early modern theater underscored the voice's volatility through the use of pubescent boy actors, whose vocal organs were especially vulnerable to malfunction.

Reading plays by Shakespeare, Marston, and their contemporaries alongside a wide range of late sixteenth- and early seventeenth-century texts—including anatomy books, acoustic science treatises, Protestant sermons, music manuals, and even translations of Ovid—Bloom maintains that cultural representations and theatrical enactments of the voice as "unruly matter" undermined early modern hierarchies of gender. The uncontrollable physical voice creates anxiety for men, whose masculinity is contingent on their capacity to discipline their voices and the voices of their subordinates. By contrast, for women the voice is most effective not when it is owned and mastered but when it is relinquished to the environment beyond. There, the voice's fragile material form assumes its full destabilizing potential and becomes a surprising source of female power. Indeed, Bloom goes further to query the boundary between the production and reception of vocal sound, suggesting provocatively that it is through active listening, not just speaking, that women on and off the stage reshape their world.

Bringing together performance theory, theater history, theories of embodiment, and sound studies, this book makes a significant contribution to gender studies and feminist theory by challenging traditional conceptions of the links among voice, body, and self.

Introduction: From Excitable Speech to Voice in Motion

"Bloom's interest in voice in the theater is grounded in early modern ideas about the human body and the mechanics of vocal production. The range of plays on which she draws lets her combine new readings of canonical works with fresh attention to less well known texts. Voice in Motion is a book of interdisciplinary reach, solid scholarship, and imaginative resonance."—Bruce Smith, University of Southern California

"A valuable addition to recent work on the history of the senses and a significant contribution to early modern gender studies. Giving voice to women, Bloom convincingly argues, requires examining the cultrually-specific meanings of voice itself."—Renaissance Quarterly