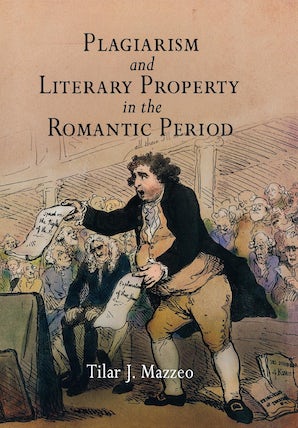 Plagiarism and Literary Property in the Romantic Period

In a series of articles published in Tait's Magazine in 1834, Thomas DeQuincey catalogued four potential instances of plagiarism in the work of his friend and literary competitor Samuel Taylor Coleridge. DeQuincey's charges and the controversy they ignited have shaped readers' responses to the work of such writers as Coleridge, Lord Byron, William Wordsworth, and John Clare ever since. But what did plagiarism mean some two hundred years ago in Britain? What was at stake when early nineteenth-century authors levied such charges against each other? How would matters change if we were to evaluate these writers by the standards of their own national moment? And what does our moral investment in plagiarism tell us about ourselves and about our relationship to the Romantic myth of authorship?

In Plagiarism and Literary Property in the Romantic Period, Tilar Mazzeo historicizes the discussion of late eighteenth- and early nineteenth-century plagiarism and demonstrates that it had little in common with our current understanding of the term. The book offers a major reassessment of the role of borrowing, textual appropriation, and narrative mastery in British Romantic literature and provides a new picture of the period and its central aesthetic contests. Above all, Mazzeo challenges the almost exclusive modern association of Romanticism with originality and takes a fresh look at some of the most familiar writings of the period and the controversies surrounding them.

1. Romantic Plagiarism and the Critical Inheritance
2. Coleridge, Plagiarism, and Narrative Mastery
3. Property and the Margins of Literary Print Culture
4. "The Slip-Shod Muse": Byron, Originality, and Aesthetic Plagiarism
5. Monstrosities Strung into an Epic: Travel Writing and the Defense of "Modern" Poetry
6. Poaching on the Literary Estate: Class, Improvement, and Enclosure

"Mazzeo's new book is . . . smart and insightful, and points out that eighteenth-century writers took a certain amount of borrowing for granted. What mattered was whether you were sneaky about it and, even more important, whether you improved upon what you took, by weaving it seamlessly into your own text and adding some new context or insight."—New York Times

"The author has read prodigiously and provides a vast amount of material bearing on laws governing literary property, much of it obscure. She discusses in detail plagiarism charges against Wordsworth, Byron, Shelley, and Clare that have often been dismissed or ignored. The bibliography is extensive."—Choice