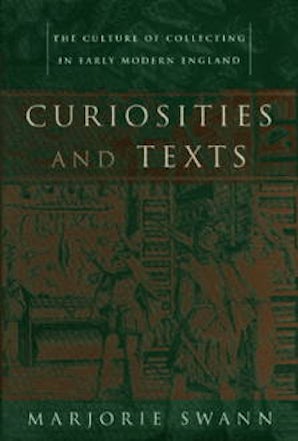 The Culture of Collecting in Early Modern England

A craze for collecting swept England during the sixteenth and seventeenth centuries. Aristocrats and middling-sort men alike crammed their homes full of a bewildering variety of physical objects: antique coins, scientific instruments, minerals, mummified corpses, zoological specimens, plants, ethnographic objects from Asia and the Americas, statues, portraits. Why were these bizarre jumbles of artifacts so popular?

In Curiosities and Texts, Marjorie Swann demonstrates that collections of physical objects were central to early modern English literature and culture. Swann examines the famous collection of rarities assembled by the Tradescant family; the development of English natural history; narrative catalogs of English landscape features that began to appear in the Tudor and Stuart periods; the writings of Ben Jonson and Robert Herrick; and the foundation of the British Museum.

Through this wide-ranging series of case studies, Swann addresses two important questions: How was the collection, which was understood as a form of cultural capital, appropriated in early modern England to construct new social selves and modes of subjectivity? And how did literary texts—both as material objects and as vehicles of representation—participate in the process of negotiating the cultural significance of collectors and collecting? Crafting her unique argument with a balance of detail and insight, Swann sheds new light on material culture's relationship to literature, social authority, and personal identity.