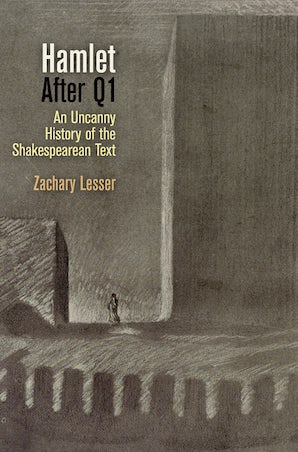 An Uncanny History of the Shakespearean Text

In 1823, Sir Henry Bunbury discovered a badly bound volume of twelve Shakespeare plays in a closet of his manor house. Nearly all of the plays were first editions, but one stood out as extraordinary: a previously unknown text of Hamlet that predated all other versions. Suddenly, the world had to grapple with a radically new—or rather, old—Hamlet in which the characters, plot, and poetry of Shakespeare's most famous play were profoundly and strangely transformed.

Q1, as the text is known, has been declared a rough draft, a shorthand piracy, a memorial reconstruction, and a pre-Shakespearean "ur-Hamlet," among other things. Flickering between two historical moments—its publication in Shakespeare's early seventeenth century and its rediscovery in Bunbury's early nineteenth—Q1 is both the first and last Hamlet. Because this text became widely known only after the familiar version of the play had reached the pinnacle of English literature, its reception has entirely depended on this uncanny temporal oscillation; so too has its ongoing influence on twentieth- and twenty-first-century ideas of the play.

Zachary Lesser examines how the improbable discovery of Q1 has forced readers to reconsider accepted truths about Shakespeare as an author and about the nature of Shakespeare's texts. In telling the story of this mysterious quarto and tracing the debates in newspapers, London theaters, and scholarly journals that followed its discovery, Lesser offers brilliant new insights on what we think we mean when we talk about Hamlet.

Introduction. The Ur-Hamlet
Chapter 1. As Originally Written by Shakespeare: Textual Bibliography and Textual Biography
Chapter 2. Contrary Matters: The Power of the Gloss and the History of an Obscenity
Chapter 3. Enter the Ghost in His Night Gowne: Behind Gertrude's Bed
Chapter 4. Conscience Makes Cowards: The Disintegration and Reintegration of Shakespeare
Conclusion. Q1 in the Library at Babel

"Lesser's great achievement . . . is to show why textual bibliography matters. . . . This highly original book thrusts bibliography up from the footnotes and into the footlights, by showing in fascinating detail how the bibliographical algebra of Q1, Q2, and F has made a crucial contribution to the interpretation and performance of Hamlet."—Times Literary Supplement

"Lesser's book . . . performs two valuable services: (i) exploring in detail the arguments of nineteenth and early-twentieth-century textual scholars working on Hamlet, and (ii) reexamining the Q1/Q2/F differences to come up with fresh explanations for them. . . . A substantial merit of Lesser's book is the minute detail with which he traces the genesis and evolution of these ideas as they were shaped by nineteenth-century scholarly competitiveness and the emergence of new facts and hypotheses. But more valuable still are Lesser's own contributions to the debates about the textual and theatrical relationships of Q1/Q2/F."—The Review of English Studies

"Zachary Lesser's fascinating book about Q1 Hamlet details what happened after the discovery of this black sheep in Shakespeare's textual family. The rich cast of characters here, including both bit players and eminent scholars, makes the story a Stoppard play waiting to be written."—Douglas Bruster, University of Texas at Austin