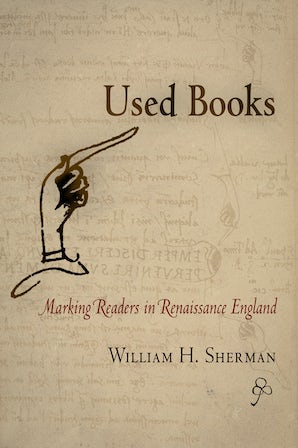 In a recent sale catalog, one bookseller apologized for the condition of a sixteenth-century volume as "rather soiled by use." When the book was displayed the next year, the exhibition catalogue described it as "well and piously used [with] marginal notations in an Elizabethan hand [that] bring to life an early and earnest owner"; and the book's buyer, for his part, considered it to be "enlivened by the marginal notes and comments." For this collector, as for an increasing number of cultural historians and historians of the book, a marked-up copy was more interesting than one in pristine condition.

William H. Sherman recovers a culture that took the phrase "mark my words" quite literally. Books from the first two centuries of printing are full of marginalia and other signs of engagement and use, such as customized bindings, traces of food and drink, penmanship exercises, and doodles. These marks offer a vast archive of information about the lives of books and their place in the lives of their readers.

Based on a survey of thousands of early printed books, Used Books describes what readers wrote in and around their books and what we can learn from these marks by using the tools of archaeologists as well as historians and literary critics. The chapters address the place of book-marking in schools and churches, the use of the "manicule" (the ubiquitous hand-with-pointing-finger symbol), the role played by women in information management, the extraordinary commonplace book used for nearly sixty years by Renaissance England's greatest lawyer-statesman, and the attitudes toward annotated books among collectors and librarians from the Middle Ages to the present.

This wide-ranging, learned, and often surprising book will make the marks of Renaissance readers more visible and legible to scholars, collectors, and bibliophiles.

PART I. OF MARKS AND METHODS
Chapter 1. Introduction: Used Books
Chapter 2. Toward a History of the Manicule
Chapter 3. Reading the Matriarchive

Afterword: The Future of Past Readers

"Sherman's work is indispensable, offering and demanding a complete revision of standard notions of reading in favor of a much more capacious concept of the 'use' of books before the modern era. . . . An essential book."—Stephen Orgel

"Learned and lively. . . . The first comprehensive account of the ways of readers in the last age when books held, or seemed to hold, the answers to all of the most profound questions."—Anthony Grafton, Bookforum

"A very fine collection of essays that will prove invaluable to scholars, librarians, and book collectors. . . . This book can be read for pleasure, but it is primarily a learned, thoughtful, and theoretically adept examination of the evidence of reading and readers found in surviving English books of the fifteenth, sixteenth, and seventeenth centuries."—American Historical Review