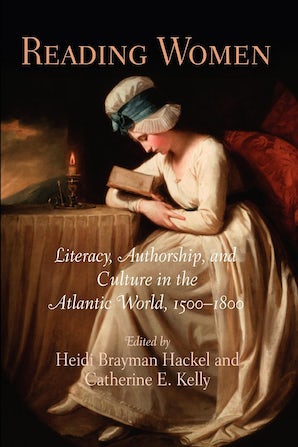 Literacy, Authorship, and Culture in the Atlantic World, 15-18

In 1500, as many as 99 out of 100 English women may have been illiterate, and girls of all social backgrounds were the objects of purposeful efforts to restrict their access to full literacy. Three centuries later, more than half of all English and Anglo-American women could read, and the female reader was emerging as a cultural ideal and a market force. While scholars have written extensively about women's reading in the nineteenth and twentieth centuries and about women's writing in the early modern period, they have not attended sufficiently to the critical transformation that took place as female readers and their reading assumed significant cultural and economic power.

Reading Women brings into conversation the latest scholarship by early modernists and early Americanists on the role of gender in the production and consumption of texts during this expansion of female readership. Drawing together historians and literary scholars, the essays share a concern with local specificity and material culture. Removing women from the historically inaccurate frame of exclusively solitary, silent reading, the authors collectively return their subjects to the activities that so often coincided with reading: shopping, sewing, talking, writing, performing, and collecting. With chapters on samplers, storytelling, testimony, and translation, the volume expands notions of reading and literacy, and it insists upon a rich and varied narrative that crosses disciplinary boundaries and national borders.

PART III. TRANSLATION AND AUTHORSHIP
'Who Painted the Lion?' Women and Novelle
—Ian Frederick Moulton
The Word Made Flesh: Reading Women and the Bible
—Janice Knight
'With All Due Reverence and Respect to the Word of God': Aphra Behn as Skeptical Reader of the Bible and Critical Translator of Fontenelle
—Margaret Ferguson
Female Curiosities: The Transatlantic Female Commonplace Book
—Susan M. Stabile
Reading Outside the Frame
—Robert A. Gross

"Destined to become a landmark study and a fixture in the bibliographies of feminist and textual scholars, literary and social historians, students of the English Renaissance and the American Republic alike."—William Sherman, University of York