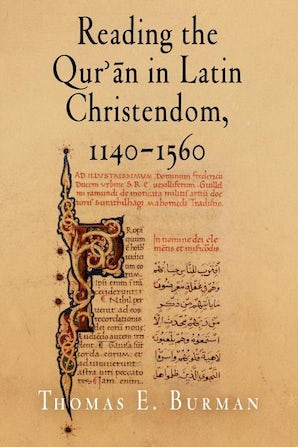 Selected by Choice magazine as an Outstanding Academic Title

Most of what we know about attitudes toward Islam in the medieval and early modern West has been based on polemical treatises against Islam written by Christian scholars preoccupied with defending their own faith and attacking the doctrines of others. Christian readings of the Qur'ān have in consequence typically been depicted as tedious and one-dimensional exercises in anti-Islamic hostility.

In Reading the Qur'ān in Latin Christendom, 1140-1560, Thomas E. Burman looks instead to a different set of sources: the Latin translations of the Qur'ān made by European scholars and the manuscripts and early printed books in which these translations circulated. Using these largely unexplored materials, Burman argues that the reading of the Qur'ān in Western Europe was much more complex. While their reading efforts were certainly often focused on attacking Islam, scholars of the period turned out to be equally interested in a whole range of grammatical, lexical, and interpretive problems presented by the text. Indeed, these two approaches were interconnected: attacking the Qur'ān often required sophisticated explorations of difficult Arabic grammatical problems.

Furthermore, while most readers explicitly denounced the Qur'ān as a fraud, translations of the book are sometimes inserted into the standard manuscript format of Christian Bibles and other prestigious Latin texts (small, centered blocks of text surrounded by commentary) or in manuscripts embellished with beautiful decorated initials and elegant calligraphy for the pleasure of wealthy collectors.

Addressing Christian-Muslim relations generally, as well as the histories of reading and the book, Burman offers a much fuller picture of how Europeans read the sacred text of Islam than we have previously had.

A Note on Matters of Form

"This book is a tour de force of interdisciplinary scholarship that deserves a wide readership among medievalists and Islamicists alike."—American Historical Review

"Singularly original both in the kinds of sources it uses and in its analyses and conclusions. . . . A major contribution that will change the way medieval and Renaissance history of Muslim-Christian relations is written."—Dimitri Gutas, Yale University

"Only a modern-day Renaissance scholar could have written this book: mastery not only of Arabic and Latin was required but also of translation methodologies, library science, Christian-Muslim relations, intellectual history, and a host of other relevant areas, such as the indigenization of scripture. Burman completed this task admirably, not only pulling together the complexities of how books are formatted for reading but also doing justice to the personalities and mind-sets of the four centuries under consideration. . . . Superior scholarship. . . . Highly recommended."—Choice