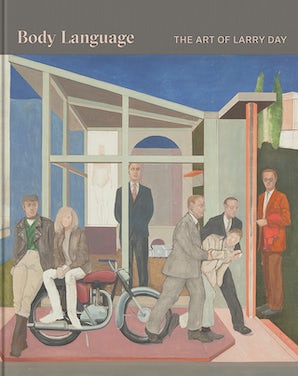 The Art of Larry Day

Larry Day (1921-1998) was a distinguished painter and a dominant force in American art from the 1950s through the 1990s. Referred to as "the dean of Philadelphia painters," he was a charismatic teacher to several generations of artists, many of whom are important figures in the arts today. This celebratory catalogue will explore his contributions to the art of his time, and the lasting power of his observations and imagination.

Day's first successes were with abstracted views of nature, but he is perhaps best known for figurative portraits and architectural landscapes, which he continued to develop for the rest of his career. The driving force behind Day's paintings was an intense engagement with earlier art and a deep classicism that governed his views of human interactions and the built environment.

In the last decades of his life, he made several series of haunting and mysterious figure com-positions that mix everyday scenes with earlier works of art, fully integrating past and present. Day's art tells us that life is deeply imbricated with the past, and that reality is not a matter of simple observation, but is made up of memories and experience of all kinds of images—from art, literature, film, television, and fashion magazines.

This fully illustrated catalogue will focus on Day's working process and relationships between his paintings and drawings. It will include a selection of Day's writings along with scholarly articles that will affirm Day's singular place within midcentury American art and his equally important legacy.