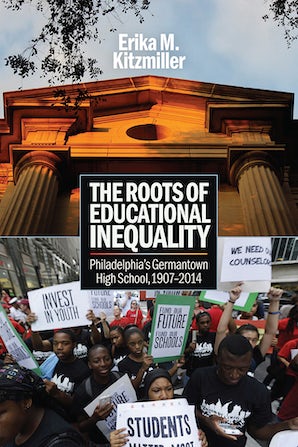 The Roots of Educational Inequality

The Roots of Educational Inequality chronicles the transformation of one American high school over the course of the twentieth century to explore the larger political, economic, and social factors that have contributed to the escalation of educational inequality in modern America.

In 1914, when Germantown High School officially opened, Martin G. Brumbaugh, the superintendent of the School District of Philadelphia, told residents that they had one of the finest high schools in the nation. Located in a suburban neighborhood in Philadelphia's northwest corner, the school provided Germantown youth with a first-rate education and the necessary credentials to secure a prosperous future. In 2013, almost a century later, William Hite, the city's superintendent, announced that Germantown High was one of thirty-seven schools slated for closure due to low academic achievement. How is it that the school, like so many others that serve low-income students of color, transformed in this way?

Erika M. Kitzmiller links the saga of a single high school to the history of its local community, its city, and the nation. Through a fresh, longitudinal examination that combines deep archival research and spatial analysis, Kitzmiller challenges conventional declension narratives that suggest American high schools have moved steadily from pillars of success to institutions of failures. Instead, this work demonstrates that educational inequality has been embedded in our nation's urban high schools since their founding. The book argues that urban schools were never funded adequately. Since the beginning of the twentieth century, urban school districts lacked the tax revenues needed to operate their schools. Rather than raising taxes, these school districts relied on private philanthropy from families and communities to subsidize a lack of government aid. Over time, this philanthropy disappeared leaving urban schools with inadequate funds and exacerbating the level of educational inequality.

"The Roots of Educational Inequality is a compelling account of how public policy, segregation, and racial attitudes have intersected historically to produce profoundly unequal educational outcomes for American children. Highlighting the inherent injustice resulting from overreliance on the beneficence of private philanthropy to support public institutions, Kitzmiller’s deep examination of the historical experience of one school and one district serves as an impassioned reminder of the importance of prioritizing equity in educational policy and funding decisions. Historians, social scientists, educators, and activists interested in understanding and remedying the structural inequalities that persist across the nation’s urban schools will find in this book a useful resource that will inform research and progressive practice for years to come."—Journal of Urban Affairs

"Kitzmiller deftly weaves ethnography, history, and geographical analyses...This book is excellent. It is especially essential reading for those who ask the question of public schools and their reforms, 'How is that racist?' While many who ask that question seek to disprove the possibility of racism, for those who can be convinced with data, this book provides multiple types of evidence to support racism, classism, and governmental neglect of the very schools that should typify American democracy."—Teachers College Record

"In The Roots of Educational Inequality, Erika M. Kitzmiller provides a clear and meticulously researched inquiry into the racial and economic inequality which has plagued America’s public high schools for over a hundred years. In her groundbreaking study, Kitzmiller brilliantly utilizes both ethnographic and quantitative methods to expose ‘how these institutions were founded to provide different opportunities and resources to Black and white children.’ Readable and thought-provoking, this volume is of interest not only to educational specialists but to everyone who cares about equality in public education."—Henry Louis Gates, Jr., Harvard University