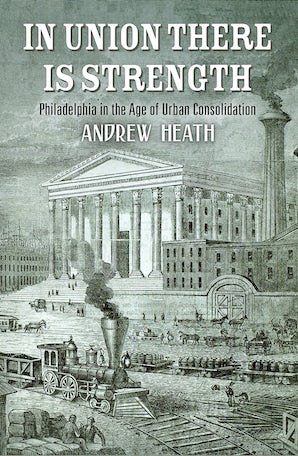 In Union There Is Strength

Philadelphia in the Age of Urban Consolidation

In the 1840s, Philadelphia was poised to join the ranks of the world's great cities, as its population grew, its manufacturing prospered, and its railroads reached outward to the West. Yet epidemics of riot, disease, and labor conflict led some to wonder whether growth would lead to disintegration. As slavery and territorial conquest forced Americans to ponder a similar looming disunion at the national level, Philadelphians searched for ways to hold their city together across internal social and sectional divisions—a project of consolidation that reshaped their city into the boundaries we know today.

A bold new interpretation of a crucial period in Philadelphia's history, In Union There Is Strength examines the social and spatial reconstruction of an American city in the decades on either side of the American Civil War. Andrew Heath follows Philadelphia's fortunes over the course of forty years as industrialization, immigration, and natural population growth turned a Jacksonian-era port with a population of two hundred thousand into a Gilded Age metropolis containing nearly a million people.

Heath focuses on the utopian socialists, civic boosters, and municipal reformers who argued that the path to urban greatness lay in the harmonious consolidation of jarring interests rather than in the atomistic individualism we have often associated with the nineteenth-century metropolis. Their rival visions drew them into debates about the reach of local government, the design of urban space, the character of civic life, the power of corporations, and the relations between labor and capital—and ultimately became entangled with the question of national union itself. In tracing these links between city-making and nation-making in the mid-nineteenth century, In Union There Is Strength shows how its titular rallying cry inspired creative, contradictory, and fiercely contested ideas about how to design, build, and live in a metropolis.

Introduction. Philadelphia in an Age of Consolidation
Chapter 1. "A Great City Is a Great Study"
Chapter 2. "The Guilty and Blood-Stained City": Radicals and the Second American Republic
Chapter 3. "The Manifest Destiny of Philadelphia": Making Antebellum Growth Politics
Chapter 4. "To Give Shape to the Destinies of Our City": Molding the Metropolis
Chapter 5. Out of Many, One: Remaking the Polity
Chapter 6. Consolidating City and Nation: Philadelphia in Civil War and Reconstruction
Chapter 7. Philadelphia Redeemed
Conclusion

"As Andrew Heath determinedly reminds us, nineteenth-century urban 'consolidators,' like their better-known 'progressive' progeny, took on a gargantuan task of economic and political development. Characters as diverse as conservative Morton McMichael and radical George Lippard recognized that a city's health was intricately bound up with that of the nation and the larger world: even a utopia of private homes would need direction and continuing steerage from above. Treating Philadelphia's Consolidation Plan of 1854 as a kind of municipal bourgeois revolution, Heath turns a local conflict into an instant, urban history classic."—Leon Fink, University of Illinois, Chicago

"Cities don't expand automatically. Certainly Philadelphia's nineteenth-century 'consolidation' of surrounding suburbs was neither automatic nor simple. Andrew Heath's dense and intriguing study demonstrates the complex, often contested, story of a major U.S. city's acquisition of adjoining communities-and the broad import of that story. For Heath skillfully links Philadelphia's evolution to both narratives of contemporary national consolidation and the saga of Paris recast under Baron Haussmann. This is urban history with heft and sweep: a valuable and an important read."—Jonathan Prude, Emory University

"In Union There Is Strength is an impressive work that tells both the story of one of the most important events in the history of Philadelphia-the 1854 consolidation that has defined the city's geographical boundaries to this day-and a story of the United States in the mid-nineteenth century. Andrew Heath brings together an impressive blend of primary and secondary sources, emphasizing deep research, compelling narrative, and original argument."—Zachary M. Schrag, George Mason University