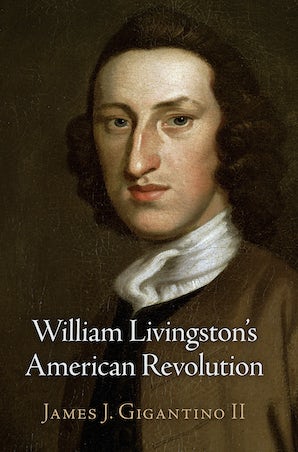 William Livingston's American Revolution explores how New Jersey's first governor experienced the American Revolution and managed a state government on the war's front lines. A wartime bureaucrat, Livingston played a pivotal role in a pivotal place, prosecuting the war on a daily basis for eight years. Such second-tier founding fathers as Livingston were the ones who actually administered the war and guided the day-to-day operations of revolutionary-era governments, serving as the principal conduits between the local wartime situation and the national demands placed on the states.

In the first biography of Livingston published since the 1830s, James J. Gigantino's examination is as much about the position he filled as about the man himself. The reluctant patriot and his roles as governor, member of the Continental Congress, and delegate to the Constitutional Convention quickly became one, as Livingston's distinctive personality molded his office's status and reach. A tactful politician, successful lawyer, writer, satirist, political operative, gardener, soldier, and statesman, Livingston became the longest-serving patriot governor during a brutal war that he had not originally wanted to fight or believed could be won. Through Livingston's life, Gigantino examines the complex nature of the conflict and the choice to wage it, the wartime bureaucrats charged with administering it, the constant battle over loyalty on the home front, the limits of patriot governance under fire, and the ways in which wartime experiences affected the creation of the Constitution.

"[D]espite his constant service during the country's formative years, [William Livingston] is seldom studied in his own right; the last biography of Livingston was published in the 1830s . . . Continuing a line of recent scholarship that greatly expands the understanding of loyalty and motivation as well as providing an in-depth look at state-level government during the Revolution, this book will appeal to readers who are interested in the political prosecution of the war and the relationship between political ideals and ordinary citizens. Challenging perceptions of a patriotic and politically involved populace, Gigantino paints an eye-opening picture of widespread unwillingness."—Journal of the American Revolution

"By documenting New Jersey Gov. William Livingston's struggles to mobilize reluctant militiamen, rein in loyalists as well as his own rambunctious legislature, and staunch the flow of intel into British-held New York City, James J. Gigantino II makes a convincing case that 'military bureaucrats' like Livingston contributed as much to the American victory in the Revolutionary War as the heroes of the battlefield."—Woody Holton, author of Forced Founders: Indians, Debtors, Slaves, and the Making of the American Revolution in Virginia

"Lawyer, author, polemicist, and the only state governor to serve through the Revolution, William Livingston started as a reluctant Revolutionary, led New Jersey through a bitter civil war, and emerged a supporter of stronger national government. As the first full biography of Livingston since 1833, this book fills an important gap in state and national history, and it deserves a wide audience."—Maxine N. Lurie, coeditor of Encyclopedia of New Jersey