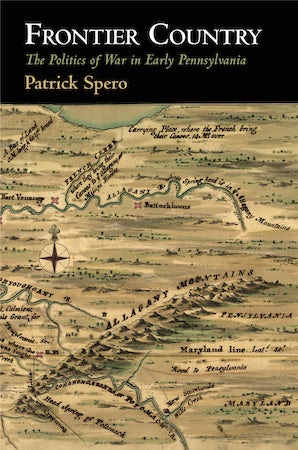 The Politics of War in Early Pennsylvania

In Frontier Country, Patrick Spero addresses one of the most important and controversial subjects in American history: the frontier. Countering the modern conception of the American frontier as an area of expansion, Spero employs the eighteenth-century meaning of the term to show how colonists understood it as a vulnerable, militarized boundary. The Pennsylvania frontier, Spero argues, was constituted through conflicts not only between colonists and Native Americans but also among neighboring British colonies. These violent encounters created what Spero describes as a distinctive "frontier society" on the eve of the American Revolution that transformed the once-peaceful colony of Pennsylvania into a "frontier country."

Spero narrates Pennsylvania's story through a sequence of formative but until now largely overlooked confrontations: an eight-year-long border war between Maryland and Pennsylvania in the 1730s; the Seven Years' War and conflicts with Native Americans in the 1750s; a series of frontier rebellions in the 1760s that rocked the colony and its governing elite; and wars Pennsylvania fought with Virginia and Connecticut in the 1770s over its western and northern borders. Deploying innovative data-mining and GIS-mapping techniques to produce a series of customized maps, he illustrates the growth and shifting locations of frontiers over time. Synthesizing the tensions between high and low politics and between eastern and western regions in Pennsylvania before the Revolution, Spero recasts the importance of frontiers to the development of colonial America and the origins of American Independence.

"This important new work takes what some have called 'the f-word' of American history (frontier) and returns it to polite conversation. Starting with the common-sense idea that we should try to understand what colonists meant when they called themselves 'frontier people,' Patrick Spero suggests how Pennsylvania, 'the Keystone State,' can indeed be a keystone for understanding not only early America but the 'frontier country' that followed after 1776."—James H. Merrell, author of Into the American Woods

"Patrick Spero's resuscitation of the concept of the frontier adds considerable analytical power and striking new dimensions to familiar stories of Pennsylvania's founding and early development."—Eric Hinderaker, University of Utah

"Historians have puzzled at the paradox of Pennsylvania's frontier, wondering how a seemingly harmonious region devolved into a space of terror by the time of the America Revolution. In this deeply researched and engagingly written new work, Patrick Spero shows that the problem of frontier governance vexed the colony from the start. The result is a marvelous book that deepens our understanding not just of Pennsylvania's history but the of broader history of imperial politics in eighteenth-century British North America."—John Smolenski, University of California Davis

"Frontier Country is well-conceived and well-executed, with an original interpretive design that shows how ideas about 'frontier' and 'frontier society' shaped relations within Pennsylvania between colonists and Native Americans and between eastern elites and western settlers."—Timothy Shannon, Gettysburg College