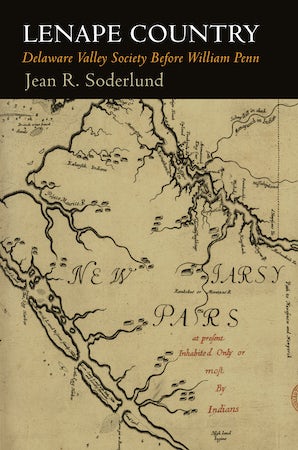 In 1631, when the Dutch tried to develop plantation agriculture in the Delaware Valley, the Lenape Indians destroyed the colony of Swanendael and killed its residents. The Natives and Dutch quickly negotiated peace, avoiding an extended war through diplomacy and trade. The Lenapes preserved their political sovereignty for the next fifty years as Dutch, Swedish, Finnish, and English colonists settled the Delaware Valley. The European outposts did not approach the size and strength of those in Virginia, New England, and New Netherland. Even after thousands of Quakers arrived in West New Jersey and Pennsylvania in the late 1670s and '80s, the region successfully avoided war for another seventy-five years.

Lenape Country is a sweeping narrative history of the multiethnic society of the Delaware Valley in the seventeenth and early eighteenth centuries. After Swanendael, the Natives, Swedes, and Finns avoided war by focusing on trade and forging strategic alliances in such events as the Dutch conquest, the Mercurius affair, the Long Swede conspiracy, and English attempts to seize land. Drawing on a wide range of sources, author Jean R. Soderlund demonstrates that the hallmarks of Delaware Valley society—commitment to personal freedom, religious liberty, peaceful resolution of conflict, and opposition to hierarchical government—began in the Delaware Valley not with Quaker ideals or the leadership of William Penn but with the Lenape Indians, whose culture played a key role in shaping Delaware Valley society. The first comprehensive account of the Lenape Indians and their encounters with European settlers before Pennsylvania's founding, Lenape Country places Native culture at the center of this part of North America.

"A commonly held idea is that Quaker settlers led by William Penn established Delaware Valley society's emphases on freedom, tolerance, and peaceful conflict. In Lenape Country, however, Jean R. Soderlund demonstrates that these Delaware Valley hallmarks originated with the Lenape Indians and were the bases of Lenape economic and political dominance through successive waves of European colonization in the region. . . . Lenape Country is meticulously researched and cautiously analyzed, qualities that strengthen Soderlund's assertions for the primacy of Lenape influence in the formation of Delaware Valley identity. It is a much needed study of this pivotal time in American history and a valuable contribution to Native American and colonial-era scholarship."—American Studies

"Succinct and imaginatively conceived, Lenape Country is one of the best narrative histories I have read to date on the European-Indian interaction along the Delaware River."—Gunlög Fur, author of A Nation of Women: Gender and Colonial Encounters Among the Delaware Indians