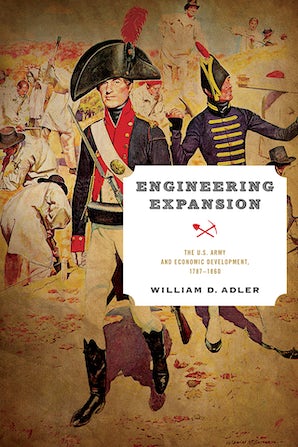 Engineering Expansion examines the U.S. Army's role in U.S. economic development from the nation's founding to the eve of the Civil War. William D. Adler starts with a simple question: if the federal government was weak in its early years, how could the economy and the nation have grown so rapidly?

Adler answers this question by focusing on the strongest part of the early American state, the U.S. Army. The Army shaped the American economy through its coercive actions in conquering territory, expanding the nation's borders, and maintaining public order and the rule of law. It built roads, bridges, and railroads while Army engineers and ordnance officers developed new technologies, constructed forts that encouraged western settlement and nurtured nascent communities, cleared rivers, and created manufacturing innovations that spread throughout the private sector. Politicians fought for control of the Army, but War Department bureaucracies also contributed to their own development by shaping the preferences of elected officials.

Engineering Expansion synthesizes a wide range of historical material and will be of interest to those interested in early America, military history, and politics in the early United States.

"With the publication of William D. Adler’s excellent book, Engineering Expansion we now have a comprehensive account of the army as an institution of state power from 1787 until the Civil War....Any scholar of American Political Development, institutional development, or military history will benefit from a close reading of Engineering Expansion. Students, in particular, will find Adler’s book to be an excellent guide to current scholarly debates in APD. Although many questions remain about the army’s role in early America, Adler’s concise volume should inspire further studies of this long neglected institution of American state building. As Adler demonstrates so persuasively in this fine book, it is time for APD to bring the military back in."—Perspectives on Politics