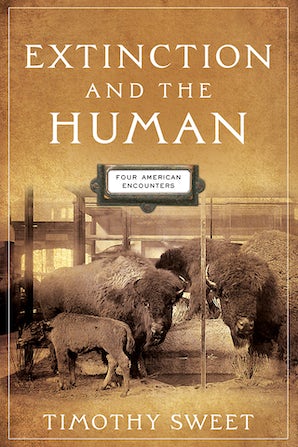 Extinction and the Human

The Americas have been the site of two distinct waves of human migration, each associated with human-caused extinctions. The first occurred during the late Pleistocene era, some ten to thirty thousand years ago; the other began during the time of European settler-colonization and continues to this day.

In Extinction and the Human Timothy Sweet ponders the realities of animal extinction and endangerment and the often divergent Native American and Euro-American narratives that surround them. He focuses especially on the force of human impact on megafauna—mammoths, whales, and the North American bison—beginning with the moments that these species' extinction or endangerment began to generate significant print archives: transcriptions of traditional Indigenous oral narratives, historical and scientific accounts, and literary narratives by Indigenous American and Euro-American authors. "If the Sixth Extinction is a hyperobject, an event so massively distributed in space and time that it cannot be experienced directly," he writes, "these cases of particular megafauna have nevertheless consistently commanded our focus and attention. They form a starting point for a coherent, approachable history."

Reflecting on questions of agency, responsibility, and moral assessment, Sweet engages with the consequences of thinking of humans as fundamentally separate from the rest of the natural world. He investigates stories of a lost race of giants at the time of the first encounters between Europeans and Indigenous Americans; culturally distinct ways of understanding the extinction of the mammoths; the impact of the Euro-American whaling industry and the controversial revitalization of Native American whaling traditions; and the bison's near-extermination at the hands of white market hunters and today's Euro-American and Native American efforts on behalf of the animal's preservation. He reflects on humans' relations with animals through models of divine preservation, competitive extermination, evolutionary determination, biophilia, and treaties with animals. Ultimately, he argues, it is the critical assessment of ideas of human exceptionalism that provides a necessary counterpoint both to apologies for human mastery over nature and deep ecology's attempts to erase the human.

Introduction. From the Pleistocene to the Anthropocene
Chapter 1. A Prehistory of Extinction
Chapter 2. Mammoths, the "Oeconomy of Nature," and Human Ecology
Chapter 3. Does the Whale Diminish? Will He Perish?
Chapter 4. Buffalo Commons, Buffalo Nation
Reprise. The Human Exception Revisited
Notes
Bibliography
Index
Acknowledgments

"[M]eticulously researched and steeped in contemporary theory...This fascinating, important book is a vital contribution to the developing field of extinction studies within the environmental humanities."—Choice

"Timothy Sweet has deep experience thinking about the intersection of American environmental, cultural, and intellectual history, from the first decades of European colonization through the nineteenth century. He is perfectly prepared to tackle questions around megafauna extinction narratives and debates in the Americas. Extinction and the Human is compelling, learned, wide-ranging, trustworthy, and thorough."—Susan Scott Parrish, University of Michigan

"Timothy Sweet has written a richly researched, theoretically sophisticated, and ultimately engrossing book. Filled with scenes of literary and cultural exchange, his accounts of the near or complete extinction of mastodons, whales, and bison have the power to stop us in our tracks, forcing us to rethink the roles and relationships of the human and nonhuman in new, sometimes visceral ways."—Randall Fuller, University of Kansas