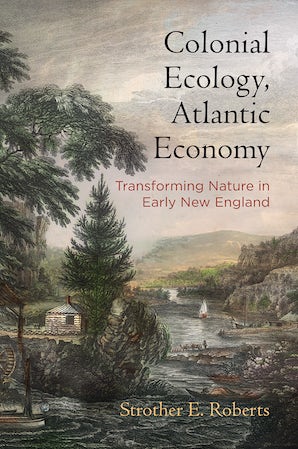 Focusing on the Connecticut River Valley—New England's longest river and largest watershed— Strother Roberts traces the local, regional, and transatlantic markets in colonial commodities that shaped an ecological transformation in one corner of the rapidly globalizing early modern world. Reaching deep into the interior, the Connecticut provided a watery commercial highway for the furs, grain, timber, livestock, and various other commodities that the region exported. Colonial Ecology, Atlantic Economy shows how the extraction of each commodity had an impact on the New England landscape, creating a new colonial ecology inextricably tied to the broader transatlantic economy beyond its shores.

This history refutes two common misconceptions: first, that globalization is a relatively new phenomenon and its power to reshape economies and natural environments has only fully been realized in the modern era and, second, that the Puritan founders of New England were self-sufficient ascetics who sequestered themselves from the corrupting influence of the wider world. Roberts argues, instead, that colonial New England was an integral part of Britain's expanding imperialist commercial economy.

Imperial planners envisioned New England as a region able to provide resources to other, more profitable parts of the empire, such as the sugar islands of the Caribbean. Settlers embraced trade as a means to afford the tools they needed to conquer the landscape and to acquire the same luxury commodities popular among the consumer class of Europe. New England's native nations, meanwhile, utilized their access to European trade goods and weapons to secure power and prestige in a region shaken by invading newcomers and the diseases that followed in their wake. These networks of extraction and exchange fundamentally transformed the natural environment of the region, creating a landscape that, by the turn of the nineteenth century, would have been unrecognizable to those living there two centuries earlier.

"Colonial Ecology, Atlantic Economy is an insightful, topical, and nuanced work that proves successful in its project. Roberts makes a strong case for cis-Atlantic frameworks, showing how the choices and actions of individuals on a local level can influence larger regional and global processes. It is a welcome contribution to the fields of environmental history, economic history, Native American history, and the history of the Atlantic World."—American Indian Quarterly